Day 19, and I would like to cite "silver" (David) and "syzygy" (Erin) as words I never want to think about again.

The shiny metal (no lie, that's what Aργυρος meant) is another one of those recurring motifs that keep worming their way into my game from the pool of cultural referents that all gamers bob around in. It's easy to see why; in the ~5-6,000 years that people have been playing with the stuff silver has picked up both a myriad of practical uses and a boatload of associated cultural baggage.


* Stronger than steel, lighter than steel, doesn't corrode. What's the betting the "secret dwarvish name" of mithril is titanium?

Enough general musing about silver though. Here's something specific to the Vaults game. 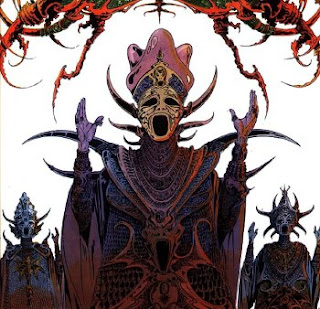 Deep within the madness and savagery of the Vaults lies a half-forgotten haven of elegance, sophistication and glamour. Whether a remnant of the lost culture that created the Vaults, or merely a spontaneous reaction against the barbarism that surrounds them, the inhabitants of the Seraglio have determined that nothing ugly or inelegant will be tolerated in their midst, and that their days will be spent in ever-more elaborate spectacle and ritual.

The Seraglio of Silver Masques is the general name given to an extended series of galleries, halls, theatres, pavilions and chambers interwoven with numerous secret, semi-secret and intermittent areas which sprawl across the fifth and sixth levels of the Vaults. Although particular rooms are often deserted or forgotten for years on end the area as a whole is dominated by the perpetual revels, soirées and events of the Argent Odalisques.

All visitors to the seraglio, whatever their origin, are expected to don symbolic masks and play their appointed role, however absurd and out-of-character it might normally be. The willingness to enter into the games of the Seraglio is the price of admission; the wit and elegance of one's performance is a measure of one's standing. Illusions, deceptions and mistaken identity are the norm, and the prevailing conceit is that no-one knows who anyone else is. Think one of those period dramas set in Venice or Versailles (Chocolat, Ridicule, Dangerous Liaisons, anything with Casanova or Byron in it, etc) if it was illustrated by Druillet.

There is no evidence that the masks proferred to guests in the seraglio have any connection at all to those worn by the Masked Sleepers of the upper Vaults. Nor is there any evidence at all that these delightfully crafted objects d'art steal knowledge from the minds of wearers, or control their will, or alter their faces, or anything else at all like that, at all.

The native cunning, personal power and political connections of the Argent Odalisques ensure that the Seraglio is neutral ground in the violence and chaos of the Vaults. Rest, pleasant conversation, esoteric lore and pleasures unimagined by the unwashed groundlings of the surface world are all available here for the right price, promise or favour. Refusal to play along will get you shunned, ejected and/or turned into a decorative feature.

Inhabitants
The odalisques of the Seraglio are a mixed group of near-humans possessed of ancient power. Each is the egotistical queen of her own petty demesne, emulous and eager for the envy, respect and grudging approval her peers. Unwitting visitors are likely to be treated as pawns in the long-running political games of the seraglio, wily ones may be able to turn their extensive connections to the power blocs within the Vaults to advantage.
In game terms the odalisques should be treated as harpys, lamia, medusae, nymphs, and/or sirens.

The odalisques amuse themselves with a variety of exotic pets (phase tigers, cockatrice, basilisks, giant serpents, etc), playthings and breeding projects (Eloi boytoys, man-bull hybrids, miscegenetic things from the Fiend Folio or the inside of Clive Barker's head), with magical research, and with their endless spectacles, extravaganzas and politicking. Each protects her sanctum as best she sees fit, but there is a commonality in the use of Ogre harem guards, Ogre magi major domos, troll assassin/saboteurs, and Masked Herald messengers (treat as Cloakers, see It Came From The SRD).

GM Note
This is my equivalent of the Drow city of Erelhei-Cinlu from D3 Vault of the Drow. The party can come crashing in like the heavy mob, killing and stealing as they go, but they're liable to take a kicking from the various "Save or [Suck/Lose/Die]" powers of the residents. If they comport themselves with a modicum of grace they might actually be able to turn the intrigues of the Argent Odalisques to their advantage. 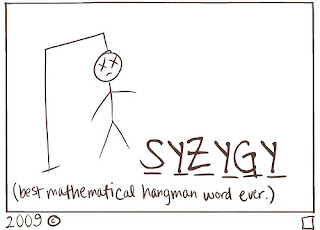 Syzygy (the short word version): it's when three celestial bodies line up, or - more rarely - any pair, usually of opposites. The word comes from the Greek for "yoked together".

Solar and lunar eclipses are interesting times in the Wilds. All those celestial bodies pulling on one another means that it's entirely too easy for things to move from one world to another. That's why you don't go poking around those rings of trilithons at symbolically important times; the various conjunctions, transits, occultations and eclipses are when it's entirely too easy to launch yourself into space (by strapping a few cannisters of dew to your belt) and also when horrible alien s**t that poisons sane life with its very presence is most likely to fall from the horror-filled vile moon that flies across the night skies of the Wilds.

All this means that astronomers are people who inspire strong reactions in the populace. Sometimes they're respected as sages, scholars and early-warning devices; other times they're despised as harbingers of doom. ("You predicted it; that means you caused it!" - Nothing quite like the good old unreason of magic thinking, is there?)