AtoZ April - C is for Courtesy

Day 3 and "Dahling, all this herd-like behaviour is simply too, too dreary." ;) 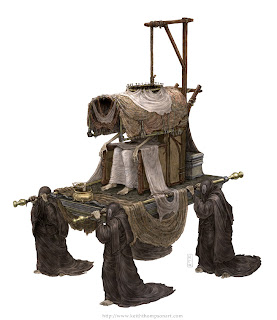 Veriest byword for the niceties of polite behaviour is Kuartsey, mist-shrouded Island of the Faceless King. The ever-changing and cryptic edicts of this unspeaking, always-hooded autocrat are relayed to his adoring subjects by a decennial succession of symbolic brides. Each of these women - mysterious in origin, although speculation is universally scurrilous - is an absurdly over-painted harlot-queen who spends much of her time lolling in a drugged stupor.

Around these last pathetic vestiges of an ancient and once-proud dynasty orbit the ever-shifting cliques and circles of the Chateau d'Kuartsey; a veritable finishing school of spite, back-biting, political infighting and sybaritic self-indulgence. In accordance with a system of absurdly elaborate treaties and ties of honour dating back centuries many lords of the Wilds send their heirs-apparent out to Kuartsey. Partially this is to put some polish on their manners; partially so randy young bucks can sow their oats elsewhere than among the servants at home; and partially so that the various hotspurs and heiresses can get to know (and cordially despise) one another in a neutral environment.

The squat and universally short-sighted inhabitants of the Isle see these visiting nobles and gaggles of superannuated former harlot-queens as something between a recurrent plague and/or a seasonal windfall. The wittily vicious antics of the lordlings are applauded, abetted and even emulated by the locals, albeit as a way of emptying the fat purses of the visitors more rapidly. The ever-shifting array of young dumb rich kids makes the island a market for some pretty outlandish goods and services.

Thanks to the half-earned, half-mythic reputation of their homeland as a cradle of exquisitely refined manners and sophisticated etiquette Kuartseyan expatriates are favoured as arbiters of taste in mainland courts. More than one absurdly unsuited islander has found himself hired as masters of revels purely on the strength of his nationality. ("But I'm just a fisherman. What do I know about the relative status, ritual dress or place in correct precedence of the second cousin of a Grand Duke. I hate all this la-di-da stuff. I just want to go home!")


Random Encounters at the Chateau d'Kuartsey

What's de rigueur among the fops, toadies and talentless-shits-with-an-ancestor today?


Roll All the Dice: Court Fad of the Day

Yes, this particular RATD can turn up some seemingly nonsensical results. But then a time-specific blindness to absurdity is the very essence of fashion.

Pic Source
Palanquin of the Strangled Thane by Keith Thompson