AtoZ April - L is for Lopsided

Lopsided monsters? Nah. That whole "asymmetrical = weird or evil or unhealthy" trope has been exploited good and hard already, and then inverted/subverted by everything from The Elephant Man to Sloth from The Goonies. 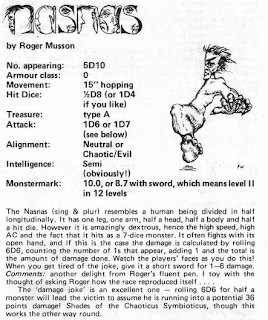 WD Fiend Factory: some hits, but plenty of misses too
(and *rassa frassa* Teleleli beating me to quarterlings. Having an idea first like it's his or something...)

So let's talk about Lopside.

Lopside is where you go when you want something separated or rendered down quickly and discretely. It's another of those odd rustic backwaters that are so typical of the Wilds, inhabited by people with thick accents, goggly eyes and an extra toe or two. They don't like outsiders here, and even expected visitors are treated with the barest minimum of courtesy.

The dominant feature of Lopside is the Weirdmills, strangely toadstool-looking mills that infest the hilltops. Through some strange pact or quirk of the land, the millers of Lopside have somehow gained the ability to render anything down into a processed form, with each mill having its particular speciality. The fees (a proportion of the final milled product) charged by the millers are always high, and usually extortionate. 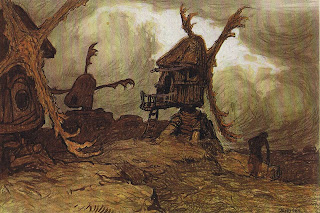 Sickle of Expropriation
Invented by a mad wizard affected by Red Star Fever this curious object separates those struck by it from their value. Any character struck by the sickle (damage as dagger) suffers extra damage equal to his HD/level - attacker's HD/level and loses a percentage of his carried wealth equal to 10% x his HD - attacker's HD. The sickle is incapable of injuring anyone devoid of any wealth.
Once per day the sickle can render the person struck incapable of independent action (as hold person, save negates). Rumours persist that, if the correct formulae are incanted over it, the sickle becomes capable of creating a temporal stasis effect.