AtoZ April - O is for Orgasmatron

Day 15, and it's all getting a bit psycho-sexual around here. 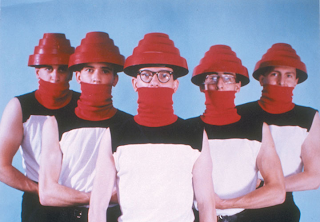 The Smart Patrol: they will give you unsolicited multiple orgasms.
Many, cunning and varied are the means by which the eccentric dynasts of the Wilds retain their hard-won thrones. One of the most curious of these is the strategy of the hermaphrodite Emperoress of Throx. Long a scholar of human psychology the Emperoress has determined that the most certain, least objectionable way to ensure the obedience and loyalty of his/her/its power-base is to weaponise sexual pleasure.

The wielders of this power are the infamous Smart Patrol, creatures which may, or may not, be men as commonly understood. Lairing in a windowless circular ziggurat the Smart Patrol emerge at irregular intervals to scour the street-tubes of Throx of dissenters, thoughtcriminals and strangely-dressed foreigners. The fates of those spirited away behind their ziggurat's massive gates of steel are unknown, but rumoured to be horrific.

Orgasmatrons [magic item - wondrous item]
Biotech blobs floating in fishbowls embedded in overcomplex weird-tech. The mechanisms are fragile, requiring two hands to carry. Orgasmatrons fire a puce beam of orgone energy able to reduce targets to helpless status orgasmus. If hit by the beam (to-hit roll ignoring physical armour) the target must save vs. paralysis or suffer (enjoy?) a hold person/monster effect for 1d20 minutes, followed by 1d3 turns under a wobbly-kneed slow effect. It is rumoured that orgasmatrons also have a secondary, weather-modifying effect.

An unfortunate few become addicted to the effects of the orgasmatron, and seek to deliberately provoke the Smart Patrol into targeting them. Unfortunately the Smart Patrol also wield big sticks with nails in them for just such eventualities...

It is speculated that the Smart Patrol have mastered the art of implanting the active orgonotech component of their orgasmatrons directly into living humans. This snippet of information (as yet unconfirmed) is the source of much speculation, conjecture and heated fantasy among aesthetes, cult leaders and mad wizards of the Wilds.

Labels: a wizard did it, AtoZ April, fluff