AtoZ April - K is for Kibble

Day 11, and I would like it on record that Dave "Sham" Bowman is an evil, evil man whose choice of words hurtses my delicate brain.

"K is for kibble" commandeth the Sham, and lo was my confidence knocked, my crest fallen and my urb entirely purt-ed.
"Kibble" asked I "what is this kibble? Quick! To the dictionaries!"

Kibble is the act of coarsely grinding something such as grain.

Kibble may also refer to:
* Kibble, a component of dog food or cat food, as in Kibbles 'n Bits
* Chris Kibble (born 1963), British jazz musician
* Kibble Palace, a greenhouse in Glasgow
* Tom W. B. Kibble (born 1932), British physicist
* Bucket, as used by a water well
* Large bucket, as used to raise ore from a mine shaft
* Chalk and flint rubble, also known as kibble in East Devon, used to consolidate ground

So, as I know little enough about physics or Glaswegian greenhouses (where weegies isolate vegetables that their food supply might not be tainted by dangerous foreign innovations like vitamins), and nothing at all about jazz , that'll be one post on large buckets in the Vaults coming up. 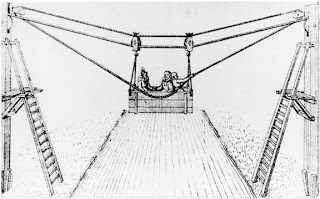 "We're perfectly safe. Just pull on that rope there..."
Delvers who survive their time in the Vaults report infrequently discovering large oak and iron buckets suspended from massive brunellian chains or thick-thick ropes. These curious arrangements are hoisted hither and yon for purposes opaque or forgotten by the massive engines of the Gearworks. Some buckets travel through tunnels, others hurtle across huge open voids in the high vaulted spaces above keyed areas.

Bucketway travel is wildly popular with goblin population of the Vaults. Some take this fascination to a strange extent, giving rise to a caste of so-called 'bucket spotters' dedicated to travelling on and recording all the bucketway routes they can find.

Whereas the Ferris Wheel of Doom is a way of travelling between levels (and worlds if someone presses the wrong button) rapidly and relatively safely, the bucketways of the Vaults are a way of getting from A to B while having the party exposed to all the local colour and nastiness in between. They're in one or more buckets being hoisted through the darkness of the mythic underworld. Any true GM will be rubbing their hands in evil glee at this...

Each bucket can carry up to 4 human-sized creatures and their carried gear, or up to 6 if they pack in like the occupants of a clown car. Strenuous activity (like dodging or fighting off attackers) makes the bucket sway and tilt wildly. Dex checks to hold on. Being thrown out of the bucket requires saves vs. paralysation to avoid falling out and either being left behind to be clocked by the next bucket to hurtle along (knocked flying, 1d10 damage, save vs breath weapon for half) or plummeting to a horrible squishy doom far, far below.

Appearance
"You happen upon a big bucket that looks like [d10]"


Detail
The massive chains and tarred hawsers forming the bucketway are generally in good nick, but the buckets themselves show often signs of wear and tear. Roll for as many pieces of dressing as you fancy.


Where does it go?
Unless guided by a native who already knows the route a randomly encountered bucketway could end up almost anywhere in the Vaults. The direction of the main chain will generally provide some clue, although these can change direction with little warning.


Pleasingly Touristic - additional 2in6 chance that the bucketway connects to/crosses one of the major named features of the level.

Tunnel Details
Width of transit tunnel: bucket width + 1d10 feet. If more than 5’ clearance there may be an additional walkway running parallel to the bucketway route.
1in10 chance of some obstruction poking up from the floor (check only once per journey). Not immediately lethal, but likely to keep life interesting.

How do we get off this thing?


So please hold tight and keep all extremities, children, halflings and squishy wizards inside the car at all times.

Labels: a wizard did it, AtoZ April, building the Vaults, fluff, mad science