AtoZ April - J is for Jungian 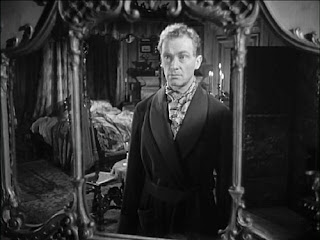 "Yes. Look deep into the mirror, you in your anachronistic clothing. What do you see?"
Only recently a new power has appeared in the Wilds, yet already fearful rumour and impossible tales already surround the whispered name of Jun Gyan the Oneiriotect, a strange outlander who makes his living selling rare, exotic drugs to the wealthy and jaded.

Clad always in sumptuously embroidered silken robes and residing either in a richly decorated pavilion or a townhouse the interior of which is swathed in hangings, curtains, veils and canopies Jun Gyan takes any one of a number of disparate form. Sometimes he seems to be an aged sallow-skinned human of exotic appearance and strange habits, at other times he seems a fox-faced humanoid of great personal power, and at still others he appears as a masked figure whose voluminous robes flow and pulsate unsettlingly. It is likely that all his many forms are false faces, mere masks disguising the truth from the eyes of the unworthy.

Jun Gyan possesses a unique artefact, a magic mirror able to craft personal hells of ironic punishment from the mindscapes and dark secrets of the morally bankrupt. Full-length silvered mirror with an elaborate thaumo-alchemical distillery built into the supporting frame. The outlet tube of this drips gradually into delicately chased glass-and-silver vials which are periodically changed and spirited away by veiled and silent servants.

Although some come to Jun Gyan willingly, staring into his mirror under the influence of a variety of emotions (jaded or morbid curiosity, self-loathing, or sheer bravado), many others are compelled to look therein either by judicial commandment or as a result of the machinations of their enemies. Jun Gyan is notably even-handed in such matters, turning away none.

Upon gazing into the mirror the victim must make a save vs. spell each round. On failing a saving throw the victim is forced to enter their own mindscape, their body falling into a lifeless state similar to that encountered under the effect of a magic jar spell (LL p34).

The Mirrorscapes of Jun Gyan

Anyone who falls under the influence of the silver mirror finds themself alone in a pocket universe of peculiar and distinctive form.  Survivors of the experience unanimously describe the world within the mirror as an empty grey plain ridged with deep trenches and pervaded with a clammy mist. The foreshortened horizon and perceptible curvature of the surface indicate how small this self-contained world is. Teleporting and spells that allow transportation to, or communication with, other planes simply do not work here. Flying away from the small grey world will result in it re-appearing ahead.  Dawdling on the surface attracts strange spectral entities (treat as Shadows) which seek to consume life force. The only escape is to head deeper, into one of the several cave/tomb entrance in the deepest channels.

[The dungeon faced by the character is a linear one-shot funnel dungeon in the Five Room Dungeon mould.

Each room is a regressed, more primitive form of its predecessor, gradually more derelict and ruinous. The first room will be full of wildly over-decorated celebrations of the character, with each successive chamber being gradually more derelict, ruinous and openly mocking of the his achievements, attainments and precious self-image. The first room might have an overdone triumphal statue or pompous portrait, the second a scarecrow erected to ape the preceding statue, the third no more than scurrilous graffitos and crudely scrawled caricatures.

The final area of the mindscape is invariably a womb-like, network of irregularly shaped and seemingly unbounded tunnels and caves wherein lurk the character's personal demons. Whatever it was that drove them to manifest their wickedness on the world will be faced herein, albeit in a twisted form.

My preferred scheme is to model each chamber in the mindscape after various parts of the human brain. The strange lunar landscape with the hungry shadows lurking about (80s electro music optional ;)) being the first. IMG this is succeeded by:

Chamber of the Telencophalon (forebrain) - Domed chamber glittering with subtle lights and bisected by a fissure running directly down the centre. In one half (revealed by experimentation, or at the most inopportune moment) of the room no magic works, in the other half physical damage cannot be inflicted.

Broad staircase leads down to...

Chamber of the Diencephalon (forebrain) - Mirror-image chamber: one wall entirely mirrored? Every creature here is treated as being under the effect of a mirror image spell. Resident creature can elect to blink using mirrors.

Spiral stair leads down to the edge of...

Chamber of the Midbrain - Wall-less mesa of unworked grey stone surrounded by a thick mist of a lighter, dove-grey shade. The staircase by which the character descended spirals away impossibly high into the darkling sky above. Sensory distortions and psychosomatic symptoms galore.

Cave opening and crawlway leads down to...

Chamber of the Hindbrain - rhombus-shaped chamber, like being inside one's own tomb. Deep thrumming, like a heartbeat. Surges of emotion, sense of things lurking unseen.

If you feel all Mr Clever-clogs about it you might even want to map the dungeon from a map of the brain. I'm not that cunning though.

Although the gross form of the successive chamber might remain constant between visitors (again, see the title) room contents can and should be tailored to the vices, flaws, inadequacies and dirty secrets of the character being emulated. The particular nature of the allegorical (*spits*) trials might be specifically tailored to the character, or the GM may prefer to fill the successive areas according to the Five Room form, or determined by oracular roll on the classic Dungeon Stocking Chart (reproduced below).


Any roll of "Empty" shouldn't be interpreted as "nothing here", but rather that the chamber contains some form of active, existential emptiness; something that battens upon the character and slowly negates some aspect of him unless he puzzles out a means of escape.

Acquisitiveness might be represented by a pack of gaggling of strutting and preening cockatrices which turn those affected by their stoning pecks into worthless pyrites. Death spiral mechanic, -1 TH per strike. Or possibly by a locked room trap which slowly fills with gold coins, slowly crushing and drowning the avaricious.

Viciousness might be represented by a colossal, excessively-armoured warrior with the squalling face of a child throwing a tantrum and a nasty line in fear-effect attacks. Or by a selection of level-draining undead, each with the face and general appearance of an NPC tortured or mutilated by the character in his adventuring career.

Callousness might be represented by a series of weeping, rag-clad persons being tormented by imps or vicious animals. The creatures will make no aggressive move against the focal character, but ignored the plight of these symbolic eidolons will see the character gradually sinking deeper and deeper into the surface of the room.

Those who are unsuccessful in their confrontations with their inner demons are rendering into Jun's mind-affecting drugs. Those who defeat their baser instincts earn experience and are restored to their bodies having learned a valuable lesson about their own natures.

Dream Elixiers of Jun Gyan
Distilled from the hopes, dreams and fears of the heedlessly proud, these precious vials of narcotic fluid grant rich visions of private worlds. Sought after by the rich decadents of the Wilds, who have little understanding of their origin or true power, only a delirious appreciation of the sensations and inspirations they enjoy. A correctly-trained mind under the influence of the Dream Elixirs is able to access the universal mindscape of the Astral Realm almost at will.
Price: If sir has to ask...