AtoZ April - V is for Vermin and Vagabonds

Turned up lots of good gameable stuff during my browsy-research, including links to the old Chaplain film The Vagabond and a manga called Vagabond based on the life of Miyamoto "sword? I'm gonna whomp you with this here oar" Musashi. Oddly enough I've recently been re-reading Neal Stephenson's Baroque Cycle, which has a picaresque self-styled King of the Vagabonds as a protagonist...

Vermin: not so much. *shudder*

A lot of settled people in the Wilds consider adventurers (at least, ones without a lot of money) to be either vagabonds or vermin, if not both. This is naught but a vicious calumny against the heroic warrior-scholars and action archaeologists who brave the mythic underworld for loot and glory. There are out there much worse than mere adventurers, however rough-hewn and scarred by their experiences they may be.

"Great holes secret are digged where earth’s pores ought to suffice. Things have learnt to walk which ought to crawl..."
-- H.P.Lovecraft, The Festival 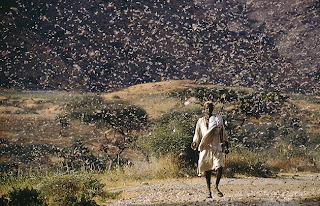 "Nice crops. Be a real shame if something were to happen to them..."
The Insectilocutors (aka the Bug-Talkers)
Sect of wierd evil hoboes affiliated to the alien inhabitants of the distant once-world of Yuggoth. They believe virtue can only be attained through hunger. Deliberately infest croplands with locusts, ankhegs and suchlike insectile horrors, sabotage food stores with vermin. Their higher orders are the vermin-priests, obsessives who have given themselves over to possession by insectile alien intelligences. What the priests want, beyond ruining the lives of farmers, is as yet undetermined.

Insectilocutor Vermin Priest
Variant cleric/cultist class whose patron powers are the alien horrors of Yuggoth. Use the cleric class with +10% to XP required for advancement at each level. Cannot turn undead, instead command insects. All their cast spells, beneficial or harmful, have grotesquely visceral and creepy insect-themed FX (as scare, LLAEC p75).

Vermin priests gain the following abilities as they level:

If you have access to Carcosa, ROCC or COC d20 I'm sure there'll be some relevant material in those unhallowed tomes.