Knocking the Thief on the Head, Again 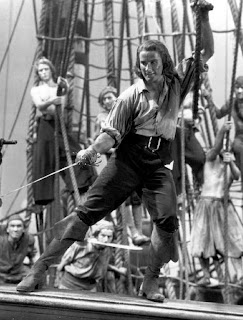 "Hide in shadows? Find/remove traps? I should cocoa!"
This was partially inspired by the "naked warrior" idea that has been doing the rounds (hat-tip Aeons & Auguries and Mythmere), and partially by Taichara's FF Red Box Hack.

For a while now I've been desirous of killing off the thief in my Labyrinth Lord games. Sure, I like having sneaky, acquisitive reprobates lurking about the place as much as anyone. But having a dedicated sneaky trapspringer just treads on too many toes for my liking. It kind of leaves the demi-humans as walking detection arrays that *ping* potential hazards, but then sit back to let the skinny human with no obvious career skills deal with them.

In my ideal (game)world everyone from the fighter to the wizard to the grotty little halfling would be taking their turn climbing sheer walls, lunging from the shadows and/or trying to unpick that lock as the walls closed in. Sure, characters would still have their own specialities, but there wouldn't be a general attitude of "send in the canary" as soon as the party bumped into a location where Trap come up on the random stocking table.

That said the light-armed, Dex-focused combatant niche in D&D is a flavourful one. I'm sure you can name as many cool fantasy thieves as I can, and - let's be honest - in D&D terms any character played by Errol Flynn or Harrison Ford was a thief.

But (and here we leave the blahblah behind) why not get rid of that jobsworth-ish little "Can't do that. Niche-protection innit squire..." oik and make 'fighting in frilly shirt' a function of the fighter class?

Check out the thief write up from the Labyrinth Lord book:


"...thieves cannot wear armor heavier than leather, and they cannot use shields. They have a need for using diverse weapons, and are able to use any kind."
-- LL, p12

Once you get away from the strict "fighter = knight in shining armour" archetype that actually sounds pretty fighterly to me. Everything from Celtic warriors to Shaolin monks to Zulu warriors can fit into the light-armoured fighter archetype.

Knock off the thief and your 'man who pushes sharp objects into people' can suit up as either:

a) the classic heavily-armoured lumbering tank, or
b) a deft nuisance in light armour with a rapier and a winning smile.

The game maths seems (based on my back-of-an-envelope calculation) to stay roughly in balance if you take certain factors and edge cases into account:

Backstab
Limit this to "while in light armour" only. Deft fencing moves and opportunistic shankings aren't really possible in 40-60lbs of ironmongery.

Note: these raw numbers are exclusive of any wacky gear the character may be packing (like cloaks of [displacement/the mountebank/shadows], rings of invisibility, oils of etherealness, etc.)

So over the course of his adventuring career Captain Tightpants has fallen a bit behind Sir Slashstab in the "Agh! Not the face!" stakes. How about allowing the light-armoured fighter a class-ability bonus to AC?

"I'm Not Wearing Any Pants!"-jutsu
Light armoured fighters gain a non-magical bonus to their AC based on their level. From whence does this bonus derive? Same place as the incidental music, the perfectly tailored costumes and the energy used to power all the wizard's FX. :p

This per-level AC bonus idea was introduced to reduce the likelihood of the lightly-armoured Dex-fighter bogarting all the bracers of armour and cloaks/rings of protection the party might happen across. The implementation was ripped off partly from the BECMI Mystic, partly from the much-maligned 3E Swashbuckler class (which actually works pretty well in Classic D&D).

Read language/use scroll?
Throw those in as another Xin6 skill option if you like. Possibly with a minimum level requirement. If it's good enough for Red Kane and the Grey Mouser...

Swashbuckler
(or Barbarian, or Shaolin Monk, or Action Archaeologist, or Warrior Nudist of the Cult of Vallejo, or...)
Requirements: None
Prime Req.: DEX
Hit Dice: 1d8
Weapons: Any
Armour: Leather only, no shield.
Attack: as Fighter
Saves: as Fighter (or Thief, it really makes no odds...)
Advancement: as Fighter

Special Abilities:
I'm not sure whether Cleaving Strikes and Backstab should stack. My sense of good taste say no, but my Ninja Scroll-loving inner munchkin says yes.

Yeah, yeah. Reinventing the wheel again. A simple AC tweak would do all this and more. S+W and Carcosa sit there saying "Oh hi. What kept you?" Etc.