AtoZ April - B is for Broth

B is for Broth

Some non-typical stuff. I did think of doing a random Goblin Stew table, or a soup golem, or riffing on the stone soup fairy tale. But nah...

Broth of Oblivion
Deep in the Vaults of Nagoh, although no one has reliably established exactly how deep, lies a long-deserted and shunned antechamber to the sealed area known as the Hundred-Fold Hells of Expiation.

The walls of this large galleried chamber are decorated with elaborate bas-reliefs in a stylised, almost Egyptian, artistic style. They appear to show the funerary practises of a long-forgotten society or sect.

The dominating features of the chamber are two-fold.  The first is an everfull font (or possibly a turreen) of oily fluid held aloft by massively sculpted inhuman figures. The second is a monstrous stone wheel mounted vertically on a raised dais. Verdigrised bronze shackles are attached to the wheel, which spins as if well-oiled at even the lightest touch. 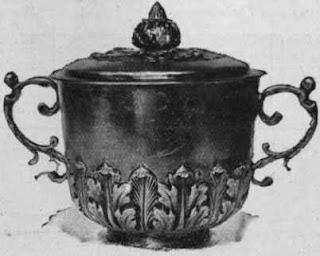 "Sure, I'll take a drink. What could possibly go wrong..."
Broth of Oblivion - drinking it wipes memory (as feeblemind spell).
Wheel of Transmigration - If a dead, undead or feebleminded creature is strapped into the wheel: treat as reincarnate spell. If used by a living, non-feebleminded creature: 25% chance of death (along with horrible screaming, torn flesh and smoking eye-sockets), 50% chance lasting insanity (treat as permanent confusion effect), 25% chance of recieving some distorted vision from a previous or future life.

[Yeah. Its basically a Raggian Green Devil Face based on a Toaist myth]

Far away in the southernmost stony deserts of the Wilds lies the strange result of an ancient magical accident committed by ancient twin sorcerers remembered in folklore as The Myanicux. It is believed the Myanicux intended to banish hunger from the world forever; instead they destroyed both their own intertwined towers and ultimately their entire homeland, all of which now lie buried beneath their infamous gooey legacy. The lasting symbol of their ancient error is a broad expanse of gloopy water heavily polluted with decomposing organic material.

To those rare creatures able to stomach its disease-infested, peculiar-smelling waters the Gloop Sea is a rich source of nourishment. Warped leviathans and schools of what may once have been either fish (or possibly land-bound herd animals) swim in its nutritious depths, perpetually feeding and growing, they in their turn are perpetually fed upon by exotic micro-ecologies of lesser entities.

The dour half-human race known as the Gloopsiders (less familiarly known as Myanicuxii or as The Expectant Apostles of the Egg) eke out a scanty living harvesting the shallows of this strange sea. Sexes are strictly segregated in dress and social role. The womenfolk flatly refuse to speak to outsiders, and spend their days paddling in clumsy round-hulled scows to harvest the bizarre bounty of the shoreline reefs and shoals. The whistles and hoots they use to communicate between boats are often wafted ashore by the fitful breezes of the Gloop Sea. The men of the tribes remain ashore, variously carving their strange statues, dragging the excess of their women’s catches to the nearest trading post, or (when all the women are absent) sitting about engaged in those universal masculine pastimes: drinking, gambling and bragging.

Gloopsider women braving the gloilpy tides and gurgling eddies of the Gloop Sea
The Gloopsiders pray unceasingly for a prophesied event they call The Descent of the Cosmic Egg. Their fatalistic religion holds that this event will herald first the draining away of the Gloop Sea and then, in the subsequent Great Scouring, the wiping away and consumption of all unrighteous (i.e. non-Gloopsider) life. So thankless are their lives that many Gloopsiders look forward to this coming apocalypse with a morbid avidity, carving worryingly elaborate statuary of their personal visions of the long-anticipated horrible deaths of everyone else.

Natural Hazards of the Gloop Sea

Quite apart from the traditional hazards to navigation (storms, tides, rocks, etc.) and the elaborate ecosystem of unique diseases, parasites, macro-protozoans (oozes) and bizarre aquatic lifeforms that have evolved in this ideal - well, ideal for them – environment, the Gloop Sea has its own strange tides and hazards to navigation.