AtoZ April - F is for Fisticuffs

Day 6, and F is also for "feeble effort on Weds there. Try harder". 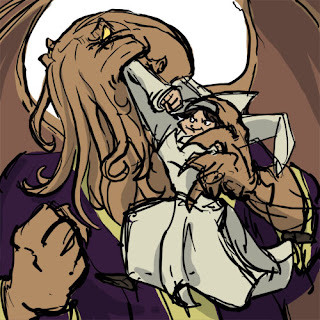 "Come on you! Fight like a squamous tentacled man-thing!"
Living as they do Hobbesian lives in a world of monsters, magic and insane godlings, the people of the Wilds have a much more casual attitude to interpersonal violence than do we pansified cubicle mice of the 21st century West. The 'civilised' societies of the Wilds exist in a barely restrained state of violent semi-anarchy at the best of times. Even in the big cities it's perfectly acceptable to call someone out for a fight, either over a point of principle, or to establish superiority in a non-lethal manner, or just to pass the time if bored.

However, in order to prevent people being killed left, right and centre over inconsequentials, a simple fight etiquette has evolved. This etiquette is understood and adhered to by most intelligent, non-inimical races. So a hobgoblin or ogre will understand (and may respond in kind) if you put up your dooks; but a manticore, troglodyte, brain flayer or memory fish will just shrug at your antics and eat/enslave you. Cave pugil.

The commonly understood "Marksburg Rules" run thus:
A lot of the non-human races consider surrender in a fistfight to be tantamount to agreement to get in the cooking pot, or worse, the Orcish pleasure barrel.

Breaching these rules can do anything from escalate the fight to an outright brawl or full-on melee, or, in especially egregious breaches of the rules, to extended mutual raiding and skirmishing. So SRS BZNZ.

There are a few wrinkles to the simple code that stop people from taking up all your time with pointless brawls in the street. Wealth and status are, as in all things, a major factor, as is profession:
Also taken into consideration in the "who gets to punch who in the face" decision-making process are profession, sex and caste:

Some adventurers make it a point of pride to do things the hard way in their professional capacity. More than one would-be hero has met his end by drunkenly bragging that he'll "...beat [such-and-such a creature] to within an inch of it's life with my bare hands...". Most such braggarts end up dead and flattened/eaten/cremated for their bravado, but the renown to be garnered from dragging a hog-tied, punch-drunk monster back to town (and the big stacks of cash to be made selling it off alive) mean that a crazy-brave few continue to chance their arms against the horrors of the Wilds.

I never got into the two pages of (Boot Hill-derived?) pummelling, grappling and overbearing rules in the 1E DMG, or the three pages of same in the BECMI RC. And don’t even ask about the swamp of needless complexity that was the 3E grappling rules. For me they were all too much wordswordswords, and not enough "I whack 'im!"

The above, or more commonly the LL unarmed combat rules (reproduced below in full), are about the limit of what I can stand.


Unarmed Combat
Unarmed combat is the same as melee combat, but all damage is 1-2+Str modifiers.

My Modifications to LL Unarmed Combat

This subsystem can be used to model grappling or strangulation (and any other "I wanna get my hands dirty..." kinky sh*t styles of fighting) as well as representing the manly art of boxing.

[Yeah, the rules will likely lead to long, drawn out fights. But unless you have total mastery of the situation that's what trying to beat a person unconscious is like; they fight back. You might want to use morale rules to indicate will to continue a fight and/or model glass-jawed loudmouths who crumple at the first blow.]

Modification: I use an EPT-derived Additional Damage Dice from HD chart IMG. In unarmed combat extra dice added are d4. This prevents a solitary 1HD goblin from ducking-and-weaving a Superhero-type to a standstill so easily.

Fighting Apes of the Wilds

Rich, high-status people usually have bodyguards to deal with challenges from low-status oiks, but a recent fashion is to have trained fighting apes as champions. As people are only supposed to fight their social equals in effect a noble who answers your challenge by calling for his fighting ape is saying - in no uncertain terms - that he doesn’t consider you a civilised being, let alone an equal. The custom of dressing the fighting ape in an parody of the challengers' preferred garb is just adding insult to injury.

These intelligent, well-disciplined animals (obeying orders as well as smart dogs) can be purchased fully trained from the beast pens of the animal trainers in most major cities of the Wilds.

Attack with unarmed combat strikes (25% real damage). Treat as having +3 Str bonus to damage.
Drawing a weapon on one will result in either cowering surrender (25% chance small ape, 50% large ape) or berserk assault (small: 75%, large: 50%) for full damage.

The finest trainer of fighting apes is the grim-faced, rye-soused Nagai Plainsman Oliph Eddwob. A former adventurer who tired of a nameless, drifting life scraping after a few silvers, Oliph can usually be found drowning his (unexpressed) sorrows in the company of his favourite red ape Leith.

Sir Oran Haut Ton (known to his intimates as Pongo) is a former fighting ape raised to the nobility by the whimsical will of the Apostarch of Netesh. The chivalrous Sir Oran is held as a model of aristocratic dignity; grave of countenance, abstemious in habit and unimpeachable in his discretion.