AtoZ April - M is for Maenad 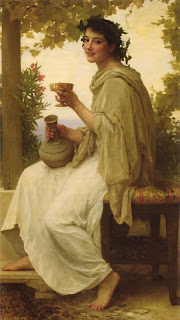 This picture is a lie. A lie that will get you killed. Horribly and bloodily.
The maenads are a recurrent phenomenon born of the memestorms that plague the Wilds. The true origin and meaning of their name has been lost, but the agonised screams of "Argh! My nads!" that announces the presence of these women haunts the imagination of male auditors. Part ideocult, part force of nature, maenads labour under a strange, sex-specific memestorm of mysterious origin and terrifying effect.

There is a possibility that this memestorm will take root wherever a woman of the Wilds has been emotionally or physically abused over an extended period. If the injustice is not taken in hand and redressed (formally or privately), maenadism suddenly takes hold of a community like some dark judgement. The stew of psychic suffering and unspoken discontent provides rich soil indeed for the horror that follows.

Almost without preamble the characteristic "Ia! Ia!" war cry of the maenads will be heard, and in one sudden upwelling of violence and horror women lash out. Bonds of familiarity, affection and kinship are forgotten; fathers, sons and lovers, all die in a welter of blood and madness. Hardened soldiers have been known to vomit and suffer night terrors after happening across the aftermath of an outbreak of maenadism.

When all the males they can reach - down to the very cattle and dogs - lie dead and dismembered, the maenads set fire to their former homes and swarm en masse into the Wilds looking for other men to punish. Some among the maenad packs retain their native cunning, luring men to their deaths slowly and carefully; others are reduced to a state of uncontrollable screaming rage, running through the Wilds on all fours, killing with unnaturally hardened tooth and claw. There is no reasoning or negotiating with a pack of maenads. Men are their prey; women either potential recruits or obstacles.

Whether maenads can - or even should - be cured of their specific madness is a source of urgent and heated dbate among the learned. Some cultures, notably the Amazons and Ganymedeans, consider them a form of spiritual harbinger; either divine retribution for wickedness, or sign of insufficient rigour in social control. The nature of any relationship between these wild memestorm-afflicted woman and the origins of such creatures as harpies, lamia and medusae, is undetermined.