AtoZ April - E is for Equinox 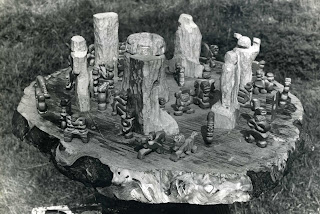 Winter Solstice is the time of darkness and encroaching death (see "use it or lose it" rule). Bar the windows, pile high the fires and all that...
Summer Solstice is the time of light and excessive growth. Yes, the light of the daystar the source of all life, but it also kills you through dehydration and gives you cancer. Why? Because it hates you.

What then are the equinoxes? In a word: Balance. Equal parts light and dark. Not too hot; not too cold. The dead aren't tearing out of their tombs hoping to chow down on the great-grandkids; the ankhegs aren't running wild in the fields and the old dears aren't keeling over in the heat. The equinoxes are a time for man and all his works.

Vernal equinox is (traditionally) when the shipping, adventuring and campaigning season traditionally start. Everyone shakes off the langour of winter, kisses the wife and pats the livestock (or vice versa), and heads out anew to make their mark on the world.
Autumnal equinox is when harvest is taken in, when taxes and debts are settled and, traditionally, when the livestock is butchered for the long winter ahead. Some isolated northern tribes bury their wives and children under the first hard snows for the winter.

All this overlapping activity at a symbolically significant time means adventure!

Of course, in the crapsack, gnawed-at-the-edges, plaything-of-idiot-godlings world of the Wilds (where 'reified' isn't just a six-buck word; it's a survival hazard), it's never entirely that simple. Balance implies an inherent tension, which can be tilted in one way or another really easily. So the equinoxes are when all the Chaotic big bads schedule for their crazy power-garnering, world-wrecking schemes to come to fruition, revelling in the irony of using a time of balance as the power source of their plans. So, yeah. Hectic.

Horizontally-streaked wild horses which appear similar to zebras. That is until you get downwind of them. At that point the unbelievably foul reek of these creatures assaults the nose, irritating the muscous membranes and causing eyes to water uncontrollably. Toxic stink discourages predators, makes area noxious enough to sicken or kill other livestock over extended period. Troglodytes don't mind it.

[Surprisingly there's no Skunk in the LL/-AEC/MF bestiary, or in the otherwise intimidatingly comprehensive OSRIC. The Companion Expansion (available from barrataria.com) has both normal and giant skunks listed.]