AtoZ April - R is for Ransack

Self-mobile bag of loot? Probably best to leave it to its own devices...
The Ran Sack [Magic Item/Trick]
A unique object (entity?) sacred to the enigmatic toad gods of Chaos. It takes the form of a self-mobile small sack made of frogskin. The Ran Sack crawls slowly (<30'/round) around the Vaults blithely disregarding the laws of nature and burping temporary objects and beings into the world.

Think of anything you like, the more outlandish and lolrandom the better. Sooner or later the ransack will spew up a protomatter version to make life a little more interesting for 1d12 rounds, perhaps longer.* The Ran Sack can disgorge living entities, impossible objects and non-physical magical effects if so desired.

* On a 12 the period of time for which the latest enigmatic horfing of the Ran Sack endures increases to 1d12 of the next higher bracket. Round > Minute > Turn > Hour > Watch (4 hour overland turn) > Day > Week > Month > etc. At the end of the allotted period the protomatter dissipates. No mortal magic can prevent this. Divine magic might, but the gods are loath to get involved in the antics of the toad gods.

Yes, you can put things in the Ran Sack. You can also root around in it. And it is large enough to put over your head. (I dare you... :) )

The Ran Sack has the self-preservation instincts of a dozy farm animal, but no real sense of intelligent thought. It can be destroyed by many of the same means as a normal sack. However the whimsical wrath of the toad gods will likely fall upon those who harm their favourite relic. (herald? avatar? plaything? pet?)

Sects and ideocults of the Wilds beyond the obvious Chaos cults would pay handsomely for possession of the Ran Sack. Some for its experimental value, others for its totemic nature. Of course, they'd likely also kill to prevent such a thing from falling into the hands of their rivals.

Did you know the British Royal Mail had their own dungeon, and they decided they were bored with it in 2002. 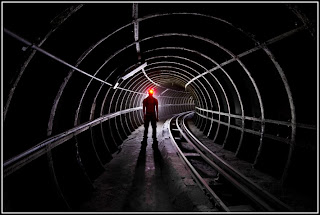 "They were simple hipsters before the inexplicable power
of the carmine oculus took possession of them.
We should probably kill them anyway."

Labels: a wizard did it, AtoZ April, bizarre cosmology, fluff