AtoZ April - G is for Geometry 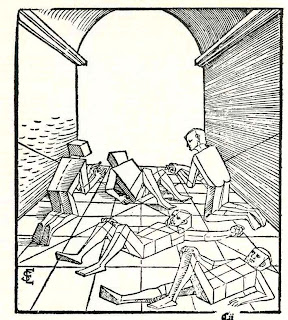 "There's a ghost with a conscience, a bridge full of nonsense.
(incoherent mumbling) Say that again and I'll generalise you!"
-- Dammaki Half-a-Man*

* with apologies to HMHB

Deep in the Vaults are places where the structure of the world itself breaks down. Lacunae in the ordered universe with which only the greediest and most power-hungry would dare tinker. Hushed voices in the bars and dives of Adburg speak of friends and allies lost to such twisted loci as Zeno's Dollhouse, the Chambers of Devouring Night, or the Hall of Blind Windows. Among these places - fearsome even to the jaded treasure seekers who trawl the underworld in search of power and wealth - is ranked the enigmatic Euclidrome.

The aftermath of an abortive attempt to fully integrate the timeless purity of the Astral Realm with the material world, the Euclidrome is a profoundly alien space unsuited for normal human life. It is a place where the Ideal intrudes into the grubby, violent, compromised lives of adventurers, with often irrevocable consequences.

The area of the Vaults around the entrance to the Euclidrome is haunted by a tormented, grieving spirit that attempts to warn people away from the horrors therein. The very presence of this roving spirit gradually morphs its environs from the customary 'monstrous Gothic' of the Vaults into a sleek minimalist aesthetic in smooth and shining white. General rule: if Kevin McLeod would rhapsodise over the area: run away!

The entrance to the Euclidrome proper appears to be a tunnel opening out onto a narrow, rail-less bridge spanning a fathomless chasm (Oooh, Jungian!). The chasm is not a physical space, more a disruption in ordered reality. As such the bridge is infested with gaps, illusions, hallucinatory terrain and distance distortion effects (q.v. spells of the same name in LLAEC). Falling off the bridge drops the poor sucker out of the created world and into the Void Between, likely unprotected, and with their warm, life-filled body glowing like a flare in the hungry darkness. "Bye bye."

Beyond the chasm the prevailing 'monstrous Gothic' masonry of the Vaults is replaced by a smooth white minimalism in all things. Even visitors find themselves becoming sleeker, glossier and more 'airbrushed'. The largely interchangable chambers (the walls of which seem to repel, absorb or otherwise erase directional markings left upon then) each contain a single unique abstract sculpture on a pedastal. The sculptures gradually morph from complex to simple forms and back again over time. What exactly these things do, and whether they can be removed from the Euclidrome, is entirely at the GM's option.

As one travels deeper into the Euclidrome things become ever more abstracted. Unique objects lose their uniqueness and all things are gradually simplified to their platonic forms. The evenly-spaced blue lines that underlie the world become more apparent. Impossible objects and solidified concepts can be found scattered about like disregarded toys and seemingly surruptitious movement can occasionally be seen out of the corner of one's eye.

Rumour has it that those who find the centre of the Euclidrome are abstracted away entirely and irrevocably.

The Euclidrome is a soft place where the Astral Realm intrudes on the Material plane. Upon entering the Euclidrome the very laws that govern the world become simplified and idealised. In game terms this means pulling out your copy of OD&D and utilising the rules therein for the duration. ;)

To some (e.g. players and GMs of Swords and Wizardry White Box) this may not be a big deal. But I use LL with added -AECisms and a bunch of magpied house rules thrown in. As you might imagine, there were tears before bedtime. ;)

Continue deeper into the area and characters will be gradually abstracted away. As I previously wrote in connection with the Astral Realm:


...long-term visitors may find themselves slowly losing their individuality (keepsakes, memories, quirks of character, etc.) and becoming ever more notional versions of themselves over time.

Attempts to interfere with the warped space at the centre of the Euclidrome without protection of extreme puissance will result in characters being abstracted away entirely and irrevocably. A wish might save you, but restoring a character from abstraction is otherwise all but impossible. It's like trying to restore a picture from a low-resolution, VGA-colour copy: the original data is so degraded there's very little left to restore.

I'm sure that analogy will be of some comfort to the players as they roll 3d6 in order.

Ghost with a Conscience
Sole survivor of the event that created the Eudlidrome.Treat as ghost (LLAEC, p127). It will attempt to use its fear effect and magic jar ability to drive interlopers away from the area without killing them if possible. If defeated through magic or dismissed by clerical turning the ghost will return to its protective role in 1d6 days. It will continue to return so long as the effect maintaining the Euclidrome endures.

Geometric People
Vestiges of the original experimenters who wanted to integrate the Ideal Realm of the Astral with the material world. Undifferentiated, interchangeable and really abstract, the geometric people tend to blur into their environment when not carefully observed. They are opportunistic scavengers which lure interlopers into ambushes in hope of stealing their 'real-ness'.

Stats: as Wights under a permanent duo-dimension effect (see LLAEC). Geometric people seek to steal life energy (1 level per hit), attempt to flee the Euclidrome across the chasm and re-enter the mundane world. Thus far there is no record of any succeeding.

Others
Few other creatures are unable to survive the unusual conditions of the Euclidrome for any length of time. Explorers may encounter some strangely distorted phase tigers, blink dogs and other creatures capable of existing in several planes simultaneously (the reports of survivors typify these unfortunate beings as "sketchy").

Treasures of the Euclidrome
Why the hell would anyone enter this deathtrap? Well, where do you think all that highly magical, supremely lucrative reified stuff (like liquid time) comes from? This place should be paydirt for wizards interested in extra-dimensional spaces, planar travel and the like.

[error in the RATD:ESIG - the d8 is maligned as being non-Platonic while the d10 gets a pass. I'll settle his snidey decima-faced hash!]