AtoZ April - U is for Unsettling

Day 20, and the flickering things in the corner of my vision grow more overt and hungrier... 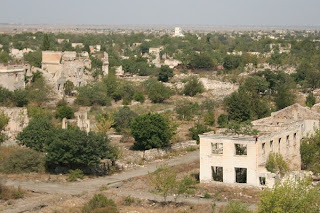 "Hello? Anybody home?"
It's axiomatic (and perhaps fortunate for the sanity of the human race) that one man's nightmare fuel is another man's narm. Personally I'm freaked out of all proportion by centipedes, mirrors in darkened rooms and unprotected precipices. You probably aren't. Individually, they're all pretty *meh* as D&D fodder. Combine them all and you've got quite a fun dungeon set piece, but (outside of a game of Call of Cthulhu) not really the stuff of creeping horror.

So I'm going to cheat and talk about a less-common use of the word "unsettling", which is connected to the idea of decolonisation. No, not as in empires contracting, but as in the "Daddy, where do ghost towns come from?" sense of people upping sticks and moving away from a place.

Even mundane reasons for depopulation and unsettlement are rich adventure fodder:

Of course, in the wacky and wonderful world of the Wilds mundane reasons to up sticks and leave the old place to rot are supplemented by arcane influence, mass hysteria and long-forgotten curses. Maybe there was an outbreak of Iconoclasmism, maybe that old curse came true, maybe...

The Celadon Blight, aka The Moonbats
Ideocult affected by a strain of Demolishing Mania. The Celadon Blight are maniacally dedicated to the systematic dismantling and removal of everything their predecessors established. This goes beyond their simply dismantling, obsessively sorting and then dumping the physical infrastructure of their homes, through book-burning and illogical inversion of existing mores (largely for the sake of inversion), into witch-hunts of dissenters and deliberate infection campaigns against those who do not share their particular memestorm. Some Celadon Blighters go so far as to drive their own families into the Wilds to starve, or spend their time obsessively dusting away their own footprints.

RATD: Unsettlements
Who lived in the spooky deserted village?
When was it deserted, and why?
Who (or what) lurks there now?