AtoZ April - Y is for Yew

Of vast circumference and gloom profound
This solitary Tree! -a living thing
Produced too slowly ever to decay;
Of form and aspect too magnificent
To be destroyed.
[...]
...beneath whose sable roof
Of boughs, as if for festal purpose decked
With unrejoicing berries -ghostly Shapes
May meet at noontide:
-- Yew Trees, William Wordsworth

Uneasy lie the dead in the soil of the Wilds. Even those buried with all due ceremony sometimes return to haunt and harry the living. Since time immemorial the people of the Wilds have warded against the malice of the departed by erecting yew trees - renowned in both superstition and sacred lore for their connection with dead - at the entrances to graveyards and necropoli.

Over the long years of their lives these trees sometimes grow strange and active ...and more than a little house proud. 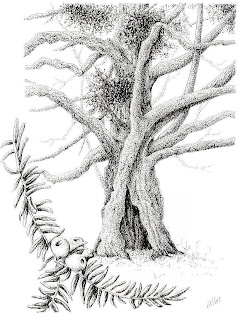 "Hoom-hoom-baroom-hoom. Get back in the ground you!"
The Warding Idho
The gnarled and ancients yews found at the entrances to graveyards have a curious habit of growing faces in knots and recesses of their broad boles. Locals will swear that particular faces are "the spit and image of old so-and-so, who died a few years back", and many come to regard the Idho as the caretaker of the graveyard it stands in. The presence of an Idho tree doubles the effectiveness of speak with dead spells, provided the interrogated dead is buried in the graveyard the Idho wards.

On rare occasions Warding Idhos have been known to rouse themselves to restore orderly peace to their homes. Funerals and sincere mourners have nothing to fear from the wrath of the Idho, but grave robbers and persistent vandals are terrorised and given a stern thrashing. Interloping undead are regarded as a significant annoyance, and will be forcibly returned to their rightful (dead) state with a minimum of fuss.

Treat Warding Idho as Treants able to turn undead as clerics of half their HD.

Labels: a wizard did it, AtoZ April, bizarre cosmology, fluff, showing some respect