I see Fantasy Flight Games have decided to cash in on the nostalgia and are re-releasing Advanced Heroquest with new artwork, packaging and art design based on the trade dress of the successful Warhammer Online morepig.

FFG do seem a little confused though. Apparently they intend to call this new product WFRP 3E and sell it in a big box for ~$100. They's funny, coz WFRP has been playable from a single book and with dice no sillier than are used for most RPGs for the last two decades and more.

I fail to see who this new release is aimed at either:

This seems to be a product in search of a market beyond the obvious Xmas trade. Colour me sceptical. 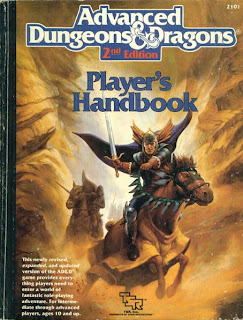 Although I came into D&D just before it was released (heck! the first few Dragon magazines I ever bought had full page ads for the shiny newness pictured to the right) I've never been a great fan of AD&D2E as a rule set.

Even when our avowedly neophile neophyte gaming group made the move from the classic orange spine 1E books to the newer (and thus - to our teenage minds - self-evidently better) black spine 2e books we were really always playing the same old cargo cult mash-up of BD&D/1E during the 2E era that we had been before. We couldn't have given you page references for anything other than the most obvious stuff, and we certainly couldn't have discoursed learnedly on the differences between editions 1 and 2.

Sure, a lot of the organisational issues and odder rules holdovers of the AD&D 1E rulebooks were 'rationalised' by the 2E books, and the Monstrous Manual - when finally released - was probably the definitive D&D monster book of all time. But we still always had the sense that 2E was just a revision and reprint, rather than an entirely new game system. Even as teens we could tell that 2E was really no more than "AD&D, revised and reprinted". It certainly wasn't the mental revolution that later edition shifts were.

In my opinion the greatest virtue of AD&D 2E wasn't the clarification of the core rules, and it certainly wasn't the interminable stream of largely interchangeable "Complete" splatbooks that regularly dropped steaming from the cloaca of the TSR release engine. The true jewel in the crown of 2E was its settings.

Yes, yes. Purge the heretic! Burn the unclean! Bury him in his own sandbox that his evil might not warp the minds of others. :p

All edition snobbery aside, the numerous campaign settings released during the 2E era (1989-1999) were some of the most imaginative, thought-provoking settings ever released for D&D. For the purposes of this argument please disregard the splatbook bloat that ultimately afflicted the various settings and helped to destroy TSR as a force in the gaming industry, and just look at the initial boxed sets for Spelljammer, Planescape, Dark Sun, Birthright, Al-Qadim, etc. in isolation. Each of these boxes offered you the chance to extend your D&D game in ways that the core rulebooks only ever hinted it:

I will concede that mixed in with the life-enhancing, game-changing, mind-stretching stuff there was also some real 'thrown together to meet a deadline' drivel. Jakandor, Maztica, and the wholesale sack-and-pillage of the D&D Known World setting spring to mind as being among the more egregious crimes-against-gaming of the late TSR era; and the less said about the eminently forgettable Council of Wyrms the better IMO. But I can honestly say I believe that if Dark Sun, Al-Qadim, Spelljammer, or even woefully metaplot-afflicted and mechanically kludged Birthright had sported a Judges Guild imprint on the box instead of a TSR brand then they'd be appreciated for their true potential by grogbloggers today.

Now, if you'll excuse me, I feel a plundering spree coming on. Time to get the old boxed sets out of storage.

Jack Vance Offers a Little Salt with my Words 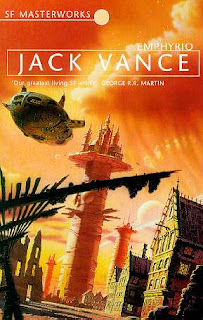 Reading Jack Vance's Emphyrio at the moment. I have to say that, against my own expectations regarding my previous experiences of Mr Vance, I'm really enjoying it. It's probably something to do with the weird future culture he's created. But then I love the kind of 'lots of inferences' baroque sci-fi typified by Frank Herbert's Eye collection, Zelazny's Lord of Light (read right before I started in on Emphyrio) or Cordwainer Smith's Instrumentality stories.

Unlike the Dying Earth stories I really get a sense of depth and scale in the back story of Emphyrio. I think it was Bruce Sterling who - after Arthur C. Clarke - called this kind of thing the 'unwritten book' of the author's research and world building. You never actually see the stuff in the unwritten book (by definition), but you can certainly infer its existence from the content and style of the written book.

So, yeah. Vance. I'll be cooking me some humble pie then...