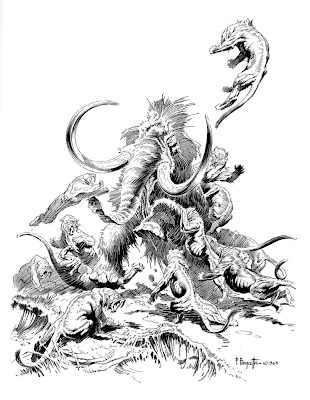 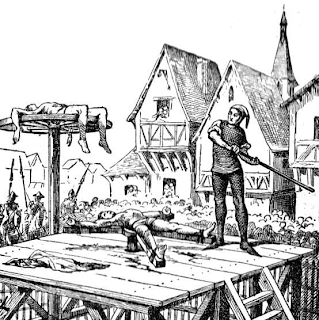 Note: the topicality of this post in the light of recent events in the UK is entirely accidental.

Sooner or later our brave heroes (such as they are) are going to fall afoul of the law (such as it is). Here are some half-formed thoughts on making their big day in court fittingly Kafkaesque and memorably unjust.

Detection and Detention
Thanks to the thieving antics of travelling vagabonds, gypsies and suchlike sturdy beggars (*cough* adventurers *cough*) outsiders are generally the first to fall under suspicion when a crime occurs. Many jurisdictions still hold to the old legal principle that if no one is punished for a detected crime then the elected headmen of the community are guilty of conspiracy with the criminals. This tends to concentrate the mind on finding anyone to punish, rather than the right person.

There are no police as we understand the term in the world of SBVD: no CID, no CSI, no Special Branch. There are civil watchmen and rural road wardens, but these are paramilitary peacekeeping organisations with no interest in helping recover your stolen purse. Privately hired watchmen are common in cities, but their effectiveness as deterrent to criminal activity is limited by the innate venality and cynicism of the breed. [1]

Unless someone is actually caught red handed and captured by an initial hue-and-cry [2] the best way to bring someone to trial is to either: 1) hunt them down yourself, or 2) hire a professional thief taker (prototypical bounty hunters and/or private detectives) to bring them in. Struggling artists and jobbing printers do a roaring trade in lurid Wanted! posters commissioned by clubs of vengeful private citizens.

1] Many (most?) private watch organisations are little more than local mafias operating on a "Shame if anything happened to your place..." protection racket basis.

2] This is the common term for the ever-present pitchfork-wielding mob in vigilante mode. The more archaic and formal term posse comitatis is used by highfalutin, la-di-da legal types.


Trial
Once captured, stripped of their goods and remanded into custody in the filthy local cells (save vs. poison or contract a random disease) a defendant will have to wait 1d20 days before being dragged before the beak. The concept of bail (remanding into the care of an appointed custodian) is gradually evolving in the cities.

The trial system in SBVD is archaic, arbitrary, chaotic and entirely dependent on how bored or dyspeptic the judge feels today. Half-forgotten centuries-old traditions and ridiculous practices are rife, and illogical - but procedurally correct and thus technically legal - decisions are the norm. Think in terms of the Red Queen’s Court in Alice in Wonderland, rather than the stately gravity of contemporary courtroom dramas.

Outrageous as it may seem to people raised under the aegis of Common Law, but the society of SBVD works on a quasi-European inquisitorial system of law. The magistrate hears the evidence he wants to hear, and then passes judgement based on his personal prejudices and/or knowledge of precedent and case law. Judges to the busy, important urban courts are appointed either by the civic council or Imperial decree, but many rural courts are still feudal, presided over by whatever semi-educated local toff feels like wearing the big wig for a while.

If a jury is convened to pass judgement (common in the big city, less so in the boondocks) they're more likely to be there to get out of the rain than to deliberate with wisdom and discretion. Most juries will either be prejudiced against the defendant ("He's in the dock; he must be guilty"), or liable to use the case to address longstanding local grievances ("Can't let rich toffs think they're above the law").

Travellers are warned that the old customs of trial by combat or ordeal are still on the books. These expedients are resorted to if the judge just can’t be bothered and fancies livening up proceedings with a bit of bloodshed.

The outcome of a trial can be decided either by GM fiat, or, more fittingly, by a 2d6 Reaction Roll:


If the GM desires, the following situational modifiers may adjust the reaction roll:

+1 for each that applies
Respectable defendant
You didn't do it
...and you have an alibi
You bribed the judge
Your lawyer is a shark
Minor offence

-1 for each that applies
Respectable victim
You did it
...and witnesses saw you
Hanging judge
Your lawyer is an idiot
Outrageous crime


What About My Defence?
Oh, the cost of hiring a lawyer? This is very much a "What you got?" situation, but most decent lawyers won’t get out of bed for less than 50GC/day. They’ll expect payment whether or not they get to present their evidence in your defence: lawyers might be venal, ethically flexible logic-choppers, but they’re not stupid.

In cases of trial by ordeal/combat a retained lawyer will offer advice on procedure, and the name of a good doctor or judicial protagonist (if required), but won’t waive his fee. ("It’s not my fault the judge decided to revive the ancient tradition of ‘trial by flaming tarred pants’ just for you. I recommend running for that pond over there as fast as you can...")

A word of warning about lawyers: watch out for the keen-eyed pro bono crusading ones out to make a name for themselves. Their grandstanding antics are just as likely to annoy the judge and get you hanged on a technicality as to get you off with a virtuoso display of logic and rhetoric. Young, fast and fiery are fine qualities in a racehorse, but less than ideal in an advocate.

Punishment
Judicial punishment is harsh, exemplary, and usually ironic in nature. Incarceration is rare and special, reserved for valuable hostages or those who someone with an oubliette wants lost and forgotten. Most punishment involves some form of violence, public humiliation or hard labour. Debtors are put to work in chain gangs; givers of short weight are forced to wear a locked cartwheel around their neck; thieves and fraudsters are fined and lose a finger; seditionists get their tongues clipped or their lips seared; rapists are castrated; grave robbers are buried alive; murderers get the rope or axe, or occasionally, a ‘Ketch Special’.

Public headsmen are a wickedly inventive breed, constantly in competition to produce the most interesting and spectacular forms of public execution. Throwing to the dogs has fallen out of fashion as cruel and barbaric; the current fad is a spectacularly pyrotechnic form of breaking on the wheel called 'the flaming Katrin'. Such spectaculars make a great day out for the whole family.

Exceptions to the Rule
There is no equality before the law in SBVD. Some people are simply above it; others aren’t even considered legal persons. In many jurisdictions a nobleman, wizard or clergyman can only be bought to book by his social peers. Yes, this means that the upper classes can literally get away with murder, so long as they don’t pick on anyone liable to arouse the sentiments of the mob. There are also places where serfs, foreigners and/or non-humans are considered legal minors or chattel, legally the responsibility of the respectable types they accompany.

Mutants, warlocks and the like rarely even get to trial: the angry mob tends to skip straight to punishment. Such cancers to the body politic commonly ‘die of injuries sustained resisting apprehension’. Creatures entirely outside society (NPC races like beastmen, orcs, giants, etc.) are deemed outlaw and thus fair game for anyone with the ability to take them down. You don’t bring an action for damages against a giant eating your sheep; you apply to the army, or that gang of passing heroes.

Pic Source: Breaking on the Wheel, courtesy of seiyaku.com 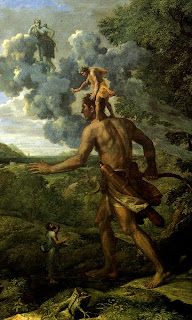 Note your humble author in yellow
Sorry for the long silence: it's been all about Dark Heresy (using the RT/Necromunda-derived Book of the Arbitrator fan rules) around our way recently, and InquisiMunda - although fun - is Off Topic for a Classic D&D blog.

New and improved version of SBVD (ver0.3) uploaded. Thanks again for downloading, perusing, using and feeding back.

Possibly of interest to those who remember White Dwarf back when it was good: Gobbledegook skirmish game by Sean Patten. My impressions on a first read: lotsa zoggin' fun! Take a couple of minutes to look over his other homebrew games and his fantastic scenery collection (including "how to" guides).