AtoZ April - A is for Atrophy

Day 1 of the April A to Z Challenge.  Here goes nuthin'.

A is for Atrophy

The Wilds are in a universal state of decay. Civilisation has fallen from its former heights; disease and degenerative conditions are rampant among the poor and unfortunate; and the world itself has been broken into fragments floating in a corrosive sea of unbeing.  Rather than innovating the scholars and explorers of contemporary societies scavenge for lost lore in cyclopean ruins overlooked by entire mountains carved in the unseeing likenesses of forgotten god-kings.

This wider malaise is reflected on a personal level: strength fails; cunning falls into dotage; faith crumbles in the face of self-absorbed godlings and an uncaring universe; even the seemingly limitless power of magic atrophies over time.  As wizards grow older and more eccentric, time and magic taking their toll on raw animal vitality and sanity, the ability of mind and will to control the massive arcane energies they channel slowly grows weaker. In especially long-lived wizards this can take the form of arcane atrophy; an inability to cast spells that came easily in their younger days, and a corresponding greater reliance on created items and magically bound servitors. (There's a reason all those high wizards in towers don't just fling fireballs at the least provocation. "The greatest master expends the least power to accomplish his goals." my arse!)

It's all rotten and getting worse. What are you going to do about it?

Arcane Atrophy: The 'Use It or Lose It' Rule of Character Power

When you stop gaining levels (either through hitting the 10th level 'soft cap', or when you retire from constant adventuring) your accumulated personal power begins to slowly, inexorably wither away. Save vs death once per game year (probably on Halloween or the winter equinox) or lose a level, exactly as if leeched by a level-draining undead. Yes, this can lead to a 'death spiral' effect as saving throws worsen with lowered levels.

Channelling otherworldly power into oneself acts like arcane Viagra: it staves off the effects of living in a battered, worn-out body in a slowly decaying world, and allows mortals to transcend the normal limits of human ability.

Ever wondered why that retired adventurer barman/sage/merchant isn't worlord of somewhere-or-other in his own right, and why Faustian pacts are so popular with the Powers That Be? This rule is why. It's intended to concentrate the minds of players when they've 'made it' in the game. Do they want to:

a) retire their land-holding character to NPC status and have him raise a successor before he gets too old and decrepit?
or
b) jump into that font of unholy power and make a transition to the post-B/X Epic scene? 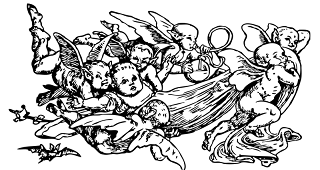 These invisible lurkers in the Ethereal Margins latch onto a person who draws their attention and over time parasitically suck away his vitality. Detect invisible will not detect the imps, although magical effects that allow the caster to see into the ethereal realm will. Cure disease will heal the damage caused by the imp, but will leave the creature in contact with its host. Dispel Evil (LLAEC) will drive the creature away, but won't heal the damage already caused.

Fighting them on the Ethereal? Treat as a swarm of Stirges harmed only by magic or magical weapons.

Roll on the table below to determine what sort of imp has latched onto the character:

Save vs. poison or death once per week or lose 1 point from a characteristic (depending on the type of Wither Imp). 25% chance/week of infection that the presence of one imp will attract further imps, accelerating the degeneration of the host. If an infestation of wither imps kill their host they will latch onto the next most powerful source of life energy in the vicinity (measure by HD/levels, favouring PCs and those they care about).

The symptoms of Wither Imps are obvious and horrific, but may take time to correctly diagnose.

[Yeah, horrible parasitic Thought Eater-type nuisances to wanderers in the Ethereal. Reified demons of cancer in the medieval "disease is caused by evil" mode.]