AtoZ April - H is for Haze

Day 8, and the madness imps are rearranging the furniture behind my eyes.
[It was this, or a riff on Jimmy Hendrix as the Trimurti of the Wilds]

There is a place so horrible, so reviled by the gods and devoid of civilisation that sane men speak of it with loathing, if at all. A place where women suckle leeches and the demented cackling of the fog-maddened inhabitants echo through reeking valleys. Travellers passing through this desolation close the curtains of their carriages and pray for their lives and sanity.

The Merelunds are a mist-shrouded tract of bogs and meres set in rocky basins and vlleys between lowering mountains. The area has proverbially inclement weather and an ill-omened reputation which transcends the merely physical deficiencies of the land.

Overland Travel
It's all swamps, lakes, hills and mountains. All wreathed in miasmic fogs and continual drizzle. If the party insist on hiking through here without a (weirdly inbred, jabbering) yokel guide to show them the easiest way then throw the book at them in the Getting Lost and Catching Nasty Infections stakes.

Fog
To most people "merelunds = fog". It's a constant nuisance which reduces visibility and increases the chance of getting lost or suffering surprise over and above the norm for the (unpleasant) terrain.

Rain
The rain of the Merelunds is what has been typified as 'lazy rain', as it it doesn't go around when it can go through. This seemingly malignant precipitation revels in ruining rations and bowstrings, slowing travel, lowering morale, and granting the gift of trench foot.
Magic that alters the weather cannot improve prevailing conditions in the Merelunds, only make them worse than they would be otherwise.

Inhabitants and Hazards of the Merelunds

The Ullswater Squid lacks the visceral hatred of boats shared by other giant squid. Tentacles shoot from lake dragging people under, or throwing them about in a playful manner. When bored the creature goes on a wander, tottering about the place on the tips of its tentacles, and causing all sorts of havoc. The squid typically place cows in trees and rip the roof off huts and sheepfolds to get at the delicious humans and lambs inside.

The Ullswater Squid can magically disguise itself by picking up and carrying a sheep around with its two leading tentacles. While it does so most observers will simply disregard the colossal monstrosity and treat its talismanic (and very confused) sheep as an ordinary straying ovine.

Treat as 9HD Giant Squid with the following additional abilities:

The Lake of Swords
A cursed lake that throws swords at people. The first most visitors know of it is when a balde hurled by more-than-mortal force comes winging towards them out of the mists (the lake attacks anyone within range once per round, striking as a 4HD creature for 1d8 damage). Community of crazy-brave sword harvesters from the margins of the Merelunds (identifiable by their fur-covered barrows) make a meagre living provoking the lake and harvesting the swords it hurls, ducking for cover behind large menhirs they've erected in the mists.

Lake Pirates
Lunatics affected by the maddening mists of the Merelunds. A group of pirates who realised that a single lake is an absurdly limited field of operations, and decided that the logical progression was to diversify into overland piracy. The lake pirates ravage the villages of the Merelunds in mighty landships hauled by giant amphibious pirahnas which they disguise under stolen oxhides. 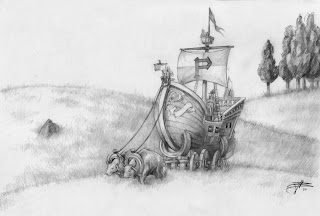 Rottors
Plague-bearing crimson otters. One cavorts and dances in an apparently friendly manner, the others in the pack maneuvre to ambush.

White Doe of Rylstone
Last survivor of a rebellion against the Mad King cursed to be hunted and slain by the wicked courtiers of the Mad King, only to be endlessly reborn at each full moon. Bestows blessings upon the virtuous.

Egotistical Sublimes
Thin-faced pale-skinned men who wander the Merelunds on the mysterious errands of their master. A race of ego eaters, the sublimes opportunistically leach life and volition from those people foolish enough to do them a good turn.

The Mad King
A tatterdemalion tyrant, terror of all around him. Egotistical in the extreme the Mad King demands that all things in his domain be marked with his crest and holds that getting your head chopped off is a positive thing. The Mad King inhabits a roofless, but richly decorated abbey somewhere in the heart of the Merelunds. Surrounded by scores of cackling and cavorting courtiers, whose emulous madness is matched only by their savagery, the King weaves endless plans of war against surrounding lands to regain "the light that never was, on sea or land". The courtiers of the king swarm across the Merelunds in press-gangs, drafting men into their masters senseless wars and leaving in their wake widows off whose sorrow and gradual wasting diminution their master is rumoured to feed.
(Stats as rakshasa)

The Clouded Queen
Prophetic, weird woman exiled by the Mad King. Her moods appear to reflect (or perhaps create?) the weather of the Merelands. Served/guarded by scores of faery foxes.

The Dreaming King under the Hill
The common folk tell stories of the true lord of the Merelunds who sleeps imprisoned beneath one or other of the cloud-wreathed mountains or icy tarns of this gods-forsaken place. They say that the Mad King is one of his nightmares, which has gone awandering. But then the common people also say that smearing yourself in excrement staves off the murrain...

d20
Pic Source
Pirates of the Eastern Plains by Tacticangel