A simple enough trick I'm going to add into an as yet unexplored section of the Gearworks (level 3 of the Vaults). 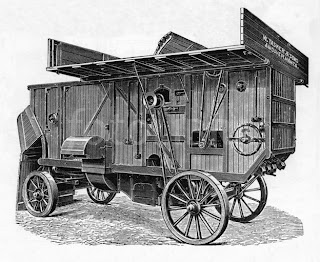 Like this, only minus wheels, plus hoodoo
This immense, room-sized mechanism has two input hoppers at one end (each large enough to take something 2' x2' in size), a bunch of Willy Wonka odd-tech pistons, gauges, levers and gears on its body, and a large output hopper at the other.  Simply put any two things in the input hopper, pull the lever and stand well back. The selected objects will be slowly, inexorably drawn into the machine, exiting the output hopper irrevocably fused into one. Whether the new object is usable, and to what end, is entirely dependent upon the whim of the GM and the ingenuity of the players.

The racket of the machine's operation requires a wandering monster check.

Putting a living thing through the machine? I'd say a save vs. death (or perhaps "vs polymorph" is more fitting?) to come out relatively unharmed. Well, apart from their bizarre new appendage and a lasting grudge against the person who pushed them in*... Failed save: they're a mangled wreck of meat and organs.

* What? You thought the sullen-faced winged baby-head gargoyles were just a decorative feature?

Simple enough then. That is until your players get cocky and start dumping things like corpses, henchmen, magic items, the odd magical substances of a fantasy world (solid shadows, reified memory/sorrow/true love, etc.), and/or clever-clogs dichotomous oddnesses (a living being in one hopper; an undead in the other) into the machine. The cleverness and inquiring natures of such players should be rewarded in the customary manner (I believe "worlds of hurt" is the operative phrase).

Of course, if there's a universal combining machine, it stands to (un)reason that somewhere in the Vaults there's also a universal divider/renderer/refiner of some kind...

(I'm certain I've nicked this from someone, but for the life of me I don't know who. Any help with attribution appreciated.)