The Map Knows More Than I Do

Doing a bit of random hex-map generation this evening (using a tinkered-with version of Victor Raymond's Wilderness Architect method from Fight On! #2).

Here's the generated terrain in question (just so the following makes at least a little sense). 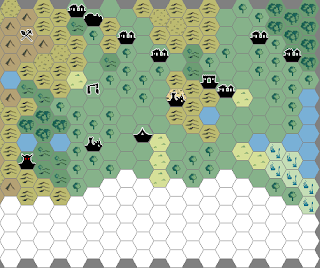 It's supposed to be the Vorra River Valley, south of Adburg and the ruined City of Nagoh. Yes, I called my adventureburg Adburg. It's easy to remember in the heat of play.

So, yer pretty boggo area of forested hills descending from mountains to a well-watered plain; so far, so fantastic realism. But suddenly the dice decree that there's a 5-mile diameter desert in the middle of this verdant landscape. Wuh?!

Now, to me an out-of-place desert hex that just screams adventure hook. I'd be totally remiss as a GM if I just left this as a blank space on the map. A few quick rolls on the appropriate tables in the ever-handy Ready Reference Sheets reveal the salient feature of this particular hex is a keep, ash-covered, and situated on a rocky outcrop. The environs are crystallised and petrified and the local inhabitants are Giants.

Ashes, crystals, keep and giants says to me the obvious: Fire Giants. Probably digging in to protect/exploit something of use in their forthcoming runt-squishing crusade.* They've likely happened upon (or been sent down by some Big Bad to secure) some form of climate-altering artefact or heat-based weapon that, even inactive, is able to create a microclimate hot and arid enough to bake the land for miles around. All that crystallised, petrified stuff is probably the result of this mini Death Valley effect: roasted trees and dried out ponds and the like. Sounds like a proper nasty place that eats adventurers for lunch. *grin*

* There's always a runt-squishing crusade in the offing for giants IMG; it's kind of a default state of existence for them in a world which - from their elevated perspective - is over-run with tiny, hyperactive vermin.

And blow me down if that doesn't also explain the sparse settlements and assorted ruins the dice have decreed shall be scattered around what should - in any sane world - be a densely populated area of settlement. Obviously the giants have already made a start on clearing the surrounding areas of its infestation of annoyingly short people. ("You must be THIS tall to continue living. Surtr commands it!")

I picture them rocking up 13th Warrior style (hellhounds, salamanders and fire imps in tow) and setting fire to local villages at night. Or standing on a rise hurling lava bombs (treat as fireball or something) down on unsuspecting bargemen plying their trade. A few instances of that is going to have refugees fleeing the area and will royally screw the economy of everywhere along the river: crops from the farming villages and recovered artefacts from the Vaults can't get down the river to the cities; manufactured and luxury goods can't get up-river to Adburg.

I'm already getting a wacky War of the Triple Alliance meets Against the Giants vibe off the situation...

"We want you to head up-river and dispose of the crazy fanatics blocking river traffic."
"Sure, we'll set out right away. Should have them run off by the end of the week."
"Oh, by the way; they're Fire Giants..."

All that from one hex! Random terrain generation: giving you more than you expected since 1974.

Pic Source:
Me, with a little help from AKS Hexmapper