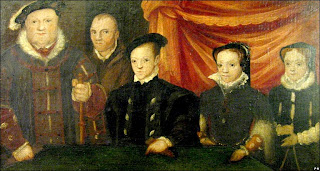 Henry 1/8: "One day kids, this rainy island full of sheep
and short-tempered drunks will be all yours."
Junior Tudors: "Erm, yay?"
Q: How do you get hereditary dynasties (even short-lived ones) in a world where killing fools and taking their stuff doesn't just make you an infamous serial killer, it makes you The Goddamn Batman? How do you stop the first King Conan wannabe from waltzing in and kicking your designated successor off the throne his dad worked so hard to acquire?

A: Let's say, for the sake of argument, that a character has effectively 'won' Classic D&D.
He's 10th level or so; rides around on griffon-back wielding a sword of fire, a lance made of lightning and a bow that shoots homing piranhas; and has a fine castle full of swag, blow and harem girls in the midst of an rich province sitting at the heart of an extended network of friends, allies and trade partners. It'd sure be nice for the character to be able to pass this on to a successor of his choice, rather than having all that hard work fall prey to the first gang of lean-and-hungry murderous hobos to wander along.

Well, the wise fathers of our game - as with so much else - already had the possibility of ensuring a bit of dynastic continuity within gameworlds covered. Behold! the Henchmen and Inheritance rules of B/X D&D.

When Junior (be he lineal son-and-heir or favoured apprentice/acolyte) comes of age his father/mentor/patron can use the rules on acquiring Henchmen to (NPC Reaction Check permitting*) designate Junior - a well-bought up boy who's had the advantage of the best training that unlimited money, favours and fear of magical retribution can buy - a bona fide henchmen in good standing, with all the benefits and appurtenances thereof.

*  all those disgruntled "I'll make my own way dammit!" noble sons adventuring incognito, thieving apprentices who steal spellbooks, and neophytes suffering crises of faith have to come from somewhere...

Pops can drag Junior off on a few ‘bonding with the old man’ adventures, doling out 50% “turning up and holding the torch” XP to the young'un as he passes on those hard-learned wyvern-wrangling and vampire-ganking techniques.  Heck, it he wants to be all Edward III about it Pa can just sit back to “let the boy earn his spurs” as a {knight/wizard/priest} errant, likely garnering full XP from his time in the finishing school of hard knocks. Rinse and repeat a few times and when the gaffer finally decides to jack it all in and (*ahem ahem*) retire to a monastery Junior is already man enough to stand up for himself against the local troublemakers.

Per the Inheritance rule, Junior then pays the customary 10% inheritance tax (either as tribute to the local overlord, or bribes to the neighbours and followers) and inherits dad's gear and title as Lord Warden of the Spongmires free and clear. Thanks to his foresighted old man, the new lord of the manor has the personal clout (i.e. levels) and reputation to back up his newly acquired title. Instead of being some 1HD eggshell armed with a hammer the rightful heir* can use all the sweet adventuring gear he's inherited without the danger of some bandit chief lucking into asymmetric power by doing a William Rufus on him.

* for a given value of 'rightful', seeing as all political legitimacy in D&D-land stems directly from personal power. One man's "rightful heir" is invariably another's "spawn of the vile usurper"...

And that, dear readers, is why - contrary to expectations - you rarely find a mere F1 as lord of that castle that just hove into view, and why death in harness among the land-holding classes only rarely ("Like, less than 50%: hardly at all really...") sets off a frenzy of internecine war and backstabbing.

(Inspired by Keith and Frank's thoughts on dynastic inheritance in 3E.)

Divine the Ancestral Will (Arcane Spell)
Level: 2       Dur: see Speak with Dead
A restricted form of the clerical spell Speak with Dead. Requires rare and expensive unguents, incenses and the like.
No limit on time since death, but can only be performed in the presence of the honoured remains and/or expensive memorial of a lineal ancestor. The ancestor will be the spirit interrogated. 1in20 chance that the caster is geased to avenge some slight to the ancestor, or to perform some task to the benefit of their family line, in return for the knowledge acquired.