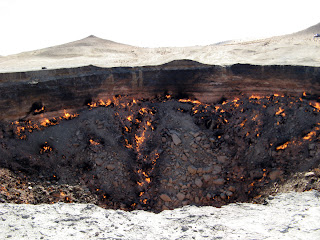 "Oh Gods it's horrible here!
Please can we go back to the dungeon?!"
Some ancient and broken roads in the Wilds lead nowhere.  Literally nowhere.  They terminate not in settlements inhabited, deserted or even ruined and monster-haunted, but in badlands that even the jaded natives of the Wilds consider unnaturally twisted and hostile.  Even more so than dungeons, these are places shunned by the sane and sensible.  The men of the Nagai Plains call these ill-omened lands names that variously translate as "Befouled Domain of the Dead", "Tangled Vista of Misery", "Place to Which Only a Damn Fool Goes" and collectively "The Footprints of Ayrvaat".

Traveller's tales concerning these places are universally cautionary and grim in tone.  Asking around the learned sages or craggier, more travel worn habitués of the bars and bordellos of Adburg will produce an unchanging unity of tone in responses: "The Footprints of Ayrvaat? Stay away.  You won't find treasure; you won't find glory; you'll just find a slow, painful, ignominious death." Few, and of little credence, are stories of lost treasure in these dread places.

Whatever the prevailing terrain the environs of Footprints of Ayrvaat are difficult going.  The land becomes ever more broken, directions and distances ever more deceptive.  Prevailing weather within several hours travel of a Footprint is almost universally bad, with vicious crosswind and limited visibility the norm, and dire rains unpleasantly common.

The outermost peripheries of the Footprints are invariably composed of stony fellfields bisected by long berms and hillocks, all of which point back in the direction from which the traveller has come.  There are numerous erratics and a great deal of broken, vitrified ground.  The little water that can be found is brackish and unpleasant at best, and more often dangerously toxic.  The terrain is sparsely scattered with remnants of what may once have been crafted metal and stone crafted to an inhuman aesthetic, but might just as easily be naturally-occurring materials heated and shaped by immense, alien forces.

The broken, cliff-scarred lands at the heart of the fellfields, surrounding a Footprint of Ayrvaat proper, will be scattered with stark, sharp-edged monoliths and rows of sculpted rocks positioned to form mile-long stretches of wall or dragons teeth blocking forward progress in the most awkward manner possible.  Numerous unburied humanoid skeletons of strange form lie unburied around the monoliths and fellfields.

The monoliths - all prominently situated - variously resemble spiked trees or vast lightning bolts flung into the ground at crazy angles.  Some are solid; others contain seemingly random hollows and voids. 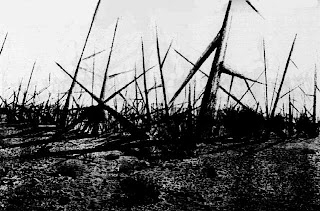 The (obviously artificial) walls and dragon’s teeth are composed of strangely-angled blocks of hard-wearing stone, deliberately positioned so that only difficult to find narrow, twisted pathways exist between them. 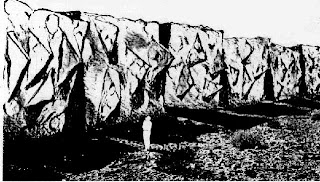 Within the broken rings of the monoliths and walls are found the foci of the Footprints.  These are invariably vast depressions furlongs across.  These vitrified and blasted badlands are most commonly bone dry and afflicted with constant dust storms, but some are partially filled by miasmal toxic lakes.  Intruders rapidly become prone to progressive malaise and wasting sickness.  Dead organic materials (leather, wood, paper, etc.) begin to decay at an accelerated rate.  Metal radiates a strange form of St Elmo's Fire which streams away from the centre of the Footprint.  Nothing good grows here; normal life rapidly sickens and dies.

The inner reaches of Footprints of Ayrvaat are devoid of any by the most stubborn life; a few warped mewling blasphemies of life crawl across the landscape scrounging whatever meagre sustenance they can from the strangely fleshy ground-hugging plant life that struggles to survive here.  As if the attenuated ecosystem were not stressor enough, living creatures are further afflicted by both wildly unnatural environmental conditions and insanely howling spectres of the long dead.

At the very centre of each Footprint is a strange area of tortured space.  Gravity, space, time and magic all become unpredictable in the vicinity of these Twists.  Normal sight and darkvision simply refuse to register whatever is at the focal point of a Footprint, treating it almost as a blind spot.  Magical probes blink out of existence, register contradictory information or react in unexpected ways, often driving those investigating them insane.  Approaching these strange cankers in the substance of things is generally fatal, even to the best-protected explorers.

All who have survived a journey to a Footprint of Ayrvaat agree: there is nothing of value, only a lethal enigma.


Footprints of Ayrvaat, Notes and Rules

Yeah, the Footprints of Ayrvaat are my attempt to add a little Gamma Wastes/Cacotopic Stain/Chaos Wastes/Mournlands vibe to the Wilds.  They’re not exciting treasure- and danger-filled focuses of excitement; they’re a (pretty heavy-handed) reminder that the Wilds are a post-apocalyptic setting which eats unique and special snowflakes for breakfast.

This link on Warning People Away from RL Bad Mojo should be of interest.

General Rules for the Footprints of Ayrvaat

In Proximity to a Footprint

Within a Footprint of Ayrvaat

All effects as the spell of the same name (see LL & LLAEC, or equivalent book of your choice). Save at –2. No save allowed if the spell true seeing was used to scry.

Radiation in the Vaults Game

Generally, as Mutant Future pp50-51.
Roll d6 for intensity; d10 if the PCs have wandered into somewhere horribly dangerous...  or if you're in a bad mood.
Failing a string of saving throws against radiation (treat as Save vs. Wands, per MF 145) doesn't result in glamorous new mutations; it results in death.
Radiation damage cannot be healed naturally; bed rest is no help, ditto macho pulp hero slugs of alcohol.  Hit points lost to radiation damage can be regained only through the use of magical healing (yeah, as 3E's Vile damage type).

It's an established trope of the Vaults game that large amounts of magic does bad sh*t to you. I'll be using these rules for areas of unnatural (often sickly-green or lurid purple) high-magic radiance.