Cripes it's dusty in here! I was temporarily seduced away from the path of (hairy, mad-eyed) gaming righteousness by the Evil Empire and Eurogames, and that's all I'm saying.

Just emerging from lurkitude to waffle about a small change to rules for charging with lances.  This was inspired by Delta's notes on lancers as kinetic weapons and by the gift-that-keeps-on-giving that is the K.A.Pendragon RPG. 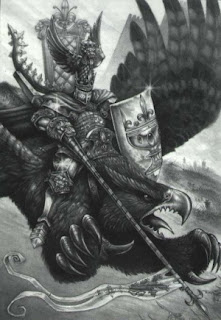 "I'm 9th level and right now my cat-bird
does more damage than me. Sad that."
IMO a high-level griffon-mounted fighter should be doing bad-ass, thematically appropriate stuff like swooping down on his foe and stapling varlets to the ground St George-style.

Suggested changes:
So Sir Boggo on his warhorse does 2x(1d*+3), while Sir Shinypants de Railroad on his dragon does 2x(1d*+10-12). Horrible overkill for low-HD opponents, but enough to give even big beasts like sabretooth cats and wyverns something to think about. And yes, you can try to train a purple worm (15HD) or whale (36HD) as a lancing mount if your DM is demented enough to allow it.

* I always thought lance damage was a d8 in B/X D&D. It turns out that LL says d6 and BECMI says d10...
This doesn't have much mechanical effect on 1HD nameless dudes on horseback, but hopefully it keeps lances interesting for higher level fighters.

Right. I shall now revert to my accustomed existence as the Drive-By Abuser ("Discussing D&D on the internet? Looks like it and all") of other peoples comment thread. ;)