[Please excuse the re-post. Blogger decided that Edit is synonymous with Send To Memory Hole.] 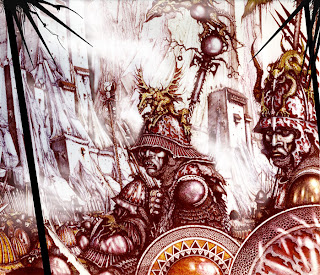 "Fool! You cannot harm me. I am protected by tons of ferociously loyal ablative meat!"
"Eh? Is he raving about us?"
Our games are getting close to the 'evict Team Monster, take their land, build immense phallic memorials to self' end game stage.  With the spectre of mass combat looming I thought I'd share my preferred swarm fightan system.

This is, in essence, a B/X-ified version of the super-simple AD&D Birthright skirmish system (which appears to be a simplified take on Battlesystem 2E, which in turn was more or less good old Perren+Gygax Chainmail in a party frock).  Some bits and wrinkles come from WFB, others from the general sea of unattributable common references in which all gamers seem to float. BECMI War Machine gets no love; it's naught but a monstrous spreadsheet-requiring mess IMO.

This system isn't set up to cope with magic-heavy combats or packs of monsters with special attacks.  It's meant to resolve what the kind of havoc the non-speaking extras are inflicting on one another in a die roll or two so we can all get back to the cool stuff (i.e. the PCs single out enemy generals, casters or monsters for their personal attention).

Initiative
1d6 each side. Winner chooses whether to move first or second.

Movement
As normal, or per GM discretion.
Units moved in order of increasing agility: infantry > then cavalry > then fliers.

Morale
Morale checks per B/X, because 2d6 Reaction Rolls are the path of righteousness. ;)
What happens:

Routs and Pursuit
Pursuit comes down to relative speeds.
Base speed in tens of feet/inches +1d6 (+2d6 if cavalry, +3d6 if flying).

Casualties
Half of casualties are deaths, the remainder wounded/incapacitated.  Victors can recover their wounded, take prisoners and hostages, butcher their foes, etc.

Advanced
Not really advanced, more 'one step up from basic mutual face-stabbery'.

Monstrous Creatures and NPCs
These brutes will generally just munch their way through spear-carriers (don't even roll for them, just inflict DPR and describe the carnage) until PCs get in their way.


JOESKY'S LAW Compliance Content:
Not applicable. This post is about mechanics for stabbing large quantities of dudes in the face at once, and is thus already relevant to The Mighty One's interests.

Pic Source
The inimitable Ian Miller (purveyor of only the finest nightmare fuel) of course.

-----
Appendix: Examples
(This is just me thinking aloud and getting a handle on relative balance. You'll probably want to skip this entirely.)
Note: the DPR figures used here are exclusive of any modifications from Resolution Dice.

This is likely to be a close fight, with the outcome heavily affected by situational factors (Are the bugbears ambushing or in good cover? How good is the relative morale of the two sides?), or by the luck of the dice.

This is likely to be a squash match with Dumbo and Babar curbstomping the poor bloody infantry unless they can either panic the pachyderms or skewer them like pincushions as they charge.  There's a reason that elephants were used as shock troops by any army that had access to them for nigh-on 2000 years...

The hobs probably have the sheer numbers to beat Old Ten Heads to death, but they'll lose dozens of warriors doing so.  This type of "No time to wait for the archers.  Drown the beast beneath our dead!" situation is what Morale checks were created for...

A one-sided 'buzzsaw through raw meat' situation.  The Orcs will be relying on luck alone (the score from their die roll) to come out ahead.  They should also probably roll a Morale check when they see their opponent hove into view (as the Chainmail rule).  Let's face it; he's only leaving that last survivor alive to spread the tale...

A surprisingly close fight.  Ghoul paralysis (treated as Hold Person cast each round) and multiple attacks will tip the balance against the berserkers, not that they're likely to care less.  In the immortal words of Spoon: "I hope I give you the shits you WIMP!"