Just a couple of creatures from my game. I didn't realise until compiling them into a post quite how 'adversarial GM' they actually are. I am a bad man. 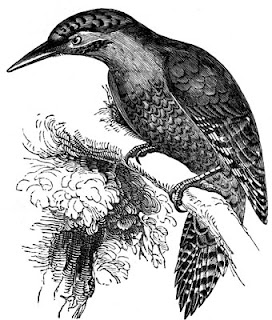 "Oh dear squire. See all the holes in the facade? Looks like a bad infestation of stonebonkers you've got there. The little buggers've wormed their way in good and proper. It'll take specialist squeezeboxjacks and stiltnetters to shift 'em, and they don't come cheap..."

Small, grey-feathered birds similar in appearance to woodpeckers, which famously make their nests in stone. Stonebonkers consume burrowing vermin, and will steal and eat small metal items (coins, buttons, seal rings, keys, etc.) to replace their rapidly-eroding beaks. Aggressive and territorial, stonebonkers are a totem symbol of war for certain tribes of the Wilds. The augurs of these tribes have developed a complex system of psycho-thaumic correspondences known as Stonebonking Mentalism.

Stonebonkers are no smarter than non-magical birds, and can be captured easily enough in nets and snares.  Keeping them caged is another matter however... They are used as a status symbol by master masons of the city states. Having a perch-stave with an ankle-chained stonebonker roosting on it is a mark of personal and professional success, as well as a handy protection against ruffians and yokels. Having a stonebonker with silvery or gold-tinged beak and claws (achieved by feeding them soft, beak-weakening precious metals over an extended period) is either cruelty or showing off. 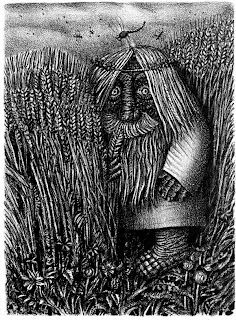 "That corn sure do got a purdy mouth."
Stocky, staring-eyed fey with more than a passing resemblance to Dwarves. They dwell in drainage ditches and hold farmers to ransom, threatening to blight crops and inflict horrible 'accidents' unless they are paid a tithe of the harvest. Especially fond of hanging around in wheat fields, although they like to infest fields of any grain which turn golden when ripe.

Corngits can be driven off by the presence of a "scaregit", a particularly horrific and old-school type of scarecrow usually made from the remains of an executed criminal.

Zoidergits are a particularly unkempt, rowdy variant that lurks in orchards.
Millgits infest local mills, and use the proverbial dishonesty of millers as cover for their greed.


"Dough-face, no-face,
Has no mouth or eyes.
There he lurks in the ground
'til the daylight dies

Dough-face, no-face,
Hiding from the light.
Tip-toes into your room
In the middle of the night

Dough-face, no-face,
Creeps up as you dream;
Takes your face and runs away
You can't even scream"
-- children's nursery rhyme

Doughy-faced humanoid night-creepers who do exactly what it says on the tin. Attempt to grapple and overbear humanoid opponents, then shove their blank, mushy faces against their foes to rob them of their features. This takes two rounds of uninterrupted face-glomphing. Save vs. p[olymorph/-aralysis/-etrifaction] or lose your face; full-face helmet gives a +2 bonus to the save.

While face stolen the character is blind, mute and unable to ingest sustenance. Their face is reduced to a featureless palimsest of skin. They can still breath, albeit with some difficulty, and can hear and respond through pantomime.

The stolen face endures on the skull of the facethief for about a month, during which time it either gleefully runs amok in polite society or spends hours obsessing in the mirror (50% chance of either). Killing a facethief will restore the face it wears to the nearest face-stolen person. You get your face back if you're lucky; that of a dead person, hunted fugitive, or member of the opposite sex if not. Whether magic can restore a stolen face is entirely at the GM's option (heal or regenerate *might* work).

Stories of cunning and ancient facethieves who can take your face from afar with no more than a gesture, and who have wormed their way into the highest echelons of human society, are naught but unsubstantiated rumour and scaremongering. Nose-stealers though: they're entirely too real; and the squat little horrors like preying on children best.

Stats: Closet trolls. Fast-moving and stealthy with some form of entangling attack or paralysing touch. Stat as Thoul (ahem) Throghrin


The People That Life Forgot


"They welcome you with broken arms
And wary eyes to stave off harm
And they move around exactly like we do.
They're paranoid, they keep their space;
They live in dreams they can't erase;
They carry ghosts around the place like glue."
-- "The People That Life Forgot", The Wildhearts

Emaciated, demi-dead scavengers dressed in mouldering tatters of once-sumptuous garb. The repetitive tap-tap-tapping of canes precedes them. Generally enervated and incapable of innovation, they are reduced to endlessly repeating rote behaviours, pausing only to rob and kill weaker creatures for what they need.
Despite all this weirdness they're not undead. Just rather more than halfway to it.