Bestiary of the Vaults: Tologs 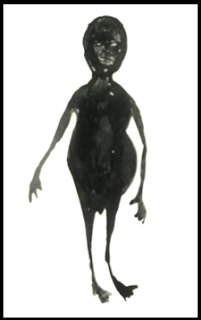 Tologs are small humanoids (2-3 feet tall) which infest the upper reaches of the Vaults, subsisting on a diet of cave insects, fungus and carrion. They dwell exclusively underground, the oily, shadow-born skin of their emaciated limbs and bloated bellies being unable to stand the sun. Small pointed fangs fill their small mouths and a malign cunning animates their beady, eirily fish-like eyes (Tologs have infravision to 60ft). They speak only rarely, and then only in their own gibbering patois.

Tologs are habitual petty thieves (able to move silently 2in6, pick pockets 2in6 and hide in shadows 4in6). They prefer to pilfer small shiny objects which are then woven into bizarre and complex sculptural forms called tologworks (imagine a dreamcatcher which has been fought over by a bower bird and a pack-rat). Explorers of the Vaults often find these tologworks suspended from ceilings and overhangs. The creatures are viciously protective of their object trouve assemblies and will react with shrieking outrage and furious assault (morale 9) if these are damaged.

A tolog living area is invariably a toxic warren of stolen junk (some of which may still have value) and layered organic detritus through which dozens of these creatures scrabble and dig. Tolog packs are dominated by the largest, most corpulent and most aggressive of their kind, with 1 in 10 of their number being exceptional tologs known as sachis. Each of these grotesque little monsters has 6 hit points, attacking as a monster with 1+1 HD.

note: I'm sick of kobolds and the Tucker/Meepo fanboi baggage that comes with them. The tologs (a backronym name fro "those orrible little oily guys") are intended as a replacement for them.