Bestiary of the Vaults: Orcish Atavism 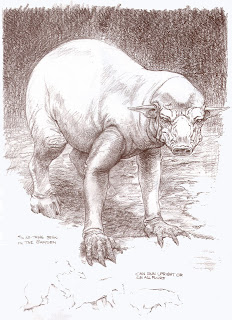 Atavisms are a degenerated sub-species of Orcs used as guard animals, food and breeding stock by their more humanoid kin. A grotesque admixture of orc and pig, atavisms are of limited intelligence (being about as smart as a dog) but retain all the malignancy and low cunning of the Orcish race. They are able to convey basic wants and needs in a pidgen Orcish. But unless driven by the whips of their keepers, are generally content to wallow, gorge and rut.

Although they can shamble along on their hind legs for short periods, atavisms are much faster when running on all fours. Their eyesight is poor, but their sensitive snouts allow them to track as well as dogs. If encountered away from their Orcish keepers, atavisms live as omnivorous scavengers. They attack armed humanoids only if clearly superior in numbers and power to their potential prey.

note: Atavisms inspired by the twisted imaginings of William Hope Hodgson and by Scott of World of Thool, whose dropsical, banjo-twanging Wilderlands Orcs were f'ing sick and are standard issue in my games (to the ongoing horror of my players).