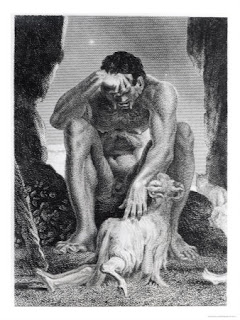 Hated and hateful, these asymmetrical monocular giant-kin lurch through the underworld seeking only to sate their unappeasable hunger, greedily devouring anything they can cram into their leering maws. They are capable of bellowing only a garbled, glossolalic Common which consists mainly of nonsensical repeated mantras.

Encountered alone (they hate their own kind almost as much as they do everything else), bronod rhong possess thick skins which are insensitive beyond measure, turning aside all barbs (they have AC0 vs arrows, bolts, and all thrown weapons). Bronod rhong attack with their grossly over-sized right arms, lashing about them with abandon. They never retreat from combat, lacking the sense to withdraw even when maintaining their position will result in their inevitable destruction.

These dreadful monsters labour under a unique curse in that all they touch is doomed to misfortune (save vs. spells or be affected as bestow curse), and that any wealth which falls under their baleful gaze is instantly rendered worthless (save vs petrification or any gold carried turns to lead, unattended objects save on a 16+). Thanks to this racial curse a bronod rhong's hoard never contains gold. Any roll indicating gold should instead read as an equivalent amount in other coinage.

How such a hateful creature endures to plague the world is a mystery to sages and adventurers alike.