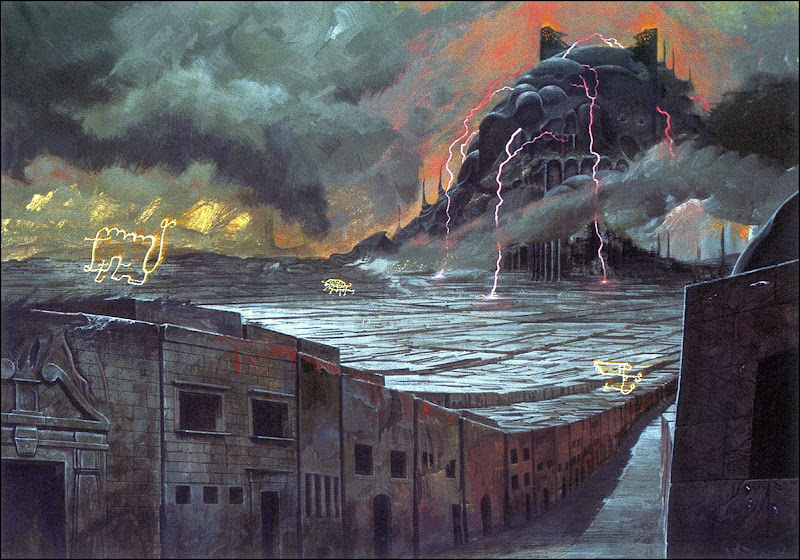 "Yep. Looks like a massive 'X marks the spot' to me."
Inspired in part by Zak's excellent urbancrawl ideas, here are a few half-formed thoughts on a quick ruined city generator.

[note: This is a work in progress piece. I'll probably be tinkering with it and adding more stuff as it occurs to me]

Draw a flow chart of interesting, lootable places in your city (in the case of my own Ruined City of Nagoh this would include such cheesy soubriqued sites as the Toppled Colossus, the Intermittent Tower, the Electric Eye, the Ruined Palace, the Verdant Ziggurat, the Grand Gate, the Necropolis of Certain and Horrific Death, the Valley of the Wang, etc).

Make each such ‘tourist attraction’ the focal point of its own neighbourhood/ward, then arrange them in kind of a spider-web looking diagram of how everything relates together.  Don't draw out every street or building, because that’s simply not important. Oh, and don’t forget to merrily cut some geographically nearer locations off from easy access, simply because you are a GM and being a difficult bastard is your calling and vocation.  ("You can get there, if you swing past the harpy-infested Throne-Temple of the Triple Goddess.  Can’t go directly, unless you fancy running the gauntlet through the Ghoultracts, then climbing the Sanguine Cliffs into the upper city while the Hivers bombard you with rocks...")

Getting from A to B
Sure, you could just decree that there are vast unobstructed Parisian boulevards between the major attractions, but how dull is that?  Far more fun to make the PCs slog their way through furlongs of devastated, overgrown ruinscape on their way to wherever they’ve decided to Greyhawk first.  Try and get the music from the early scenes of Wall-E gets stuck in their heads...

Make an encounter table of things that could happen on the way to the next major landmark.  Either a simple big table, or a convoluted series of same, as you prefer.  Add trap/trick/terrain hazard stuff like:

Whether you elect to roll for random events/encounters/complication per turn (as in a dungeon), or per exploration turn (4 hours – after MF), or per hour, or every time the players say a particular word, is entirely your business.

Detours Along the Way
If the party decide to nose around in ruined buildings then use the tables below to work out what the hell they used to be, and if there’s anything entertaining/lucrative still in there.  Roll or pick for Function, Layout and Style, Structural Features, Condition, Contents:

Function
What was this place? Choose, or consult the random building table in your preferred city sourcebook.

* See list of example trades and services at the end of this article.

Layout and Style (choose, then d8)
What does this place look like? Pick a letter or random syllable (jab your finger into a block of text or something...). The shapes of the letters, flipped and mashed together however you choose, define the general floor plan of the building. Rationalised rectilinear blocks? Sooooo 20th century.

Block off rooms, corridors, passages, staircases and such based on function, or as you see fit. This can end up with such apparent incongruities as a big old multi-floored palace divided up into loads of tiny, awkwardly-shaped rooms, blind staircases and voids. But there's nothing to say that this wasn't either: 1) intentional on the part of the designer (architects are nigh-on mad wizardly raving egotists at the best of times), or 2) a building repurposed halfway through its working life by a bunch of guys lacking access to the original blueprints.

(This section is partially urbancrawl's 'numbers as roads' idea, partially leximorph mapping as popularised by John of Nine-and-Thirty Kingdoms. Why re-invent the wheel?)

What architectural form does the building take within the footprint established? Roll d8:

Condition (d6)
Is it still standing, and does it look safe? Or is heading in there tantamount to signing your own death warrant?

1 - Rubble (3in6 unstable)
2 - Dangerous Ruin (risk of cave-ins, possibility of deliberate traps)
3-5 - Ruin
6 - Partial Ruin (3in6 occupied)
So, yeah, pack a sacrificial dwarf or two to check the quality of the stonework.

Bear in mind that most of the original movables, fixtures, and fittings will have been looted or rotted away over time.

Backstreets/Alleys/Slums
If the party decide to head deeper into the ruins, away from all the big, shiny feature you've spent hours detailing, they're probably going to end up in the remains of the low-rent areas that all cities try and airbrush away. Assume these are present by the hectare, and that they've got even more run-down and desolate than the rest of the city.

If you want, you can use them as 'rough terrain' to get the party moving in the direction you desire. Heading into uncharted, organically-developed slums should be tantamount to asking the GM to roll extra 'Getting Lost' rolls, just as if the party were out in the wilderness.  Either use a random dungeon generator or some urban geomorphs (the old Lankhmar, City of Adventure book had some ones). Do they want to risk climbing a building to get their bearings?

Example Trades and Services
(reproduced from Noonan & Wyatt - "Building a City")
A list of trades found in cities. Reproduced here because I have no intention of reinventing a well-researched wheel.

Lost Empires of Faerun by WOTC
Lankhmar, City of Adventure by TSR
Warhammer City of Chaos by Games Workshop
Pathfinder: Spires of Xin-Shalast (Rise of the Runelords #6) by Paizo