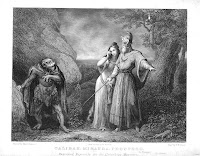 Something which occurred to me the other day. See what you make of it:

Despite what decades of D&D may have told us, and despite their accompanying paraphenalia of tomes, robes, phoenix-feather quills, and bizarre alchemical glasswork, wizards are not scholars.

This minor heresy against fantasy orthodoxy developed after reading in rapid succession (Ah! The juxtaposing joys of Google Reader!) Jeff's write-up of a hedge wizard NPC class, and then some of Paul Graham's thoughts on seeding start-ups in the technology sector.

Sages and hedge wizards are the academic scholars of the arcane world. These are the guys who putter about in the library or lab for decades, happily following their intellectual passions in safety and obscurity. They're the magic equivalent of the go-to geek who knows everything there is to know about an obscure type of circuit or obsolete OS.

Magicians (a specialist wizard type I'm imported from the "Birthright" setting: divination and illusion spells only above 2nd level) are the company men of the magic world. They learn how to one - relatively safe - thing really well, then exploit that for gain. They're the 'court magicians', the guys who cast detect lies for the court, supply the visual effects at court masques, scry on the king's enemies, and so forth.

Wizards, by contrast with their more staid colleagues, take a 'high risk; high reward' path to power. They've made a decision to go into business for themselves in the dangerous field of looting tombs, fighting ancient evils, or farming dragons for ichor. In this respect they're more like start-up founders than scholars or company men. D&D wizards are mavericks like Gates, Jobs, Brin [insert your preferred self-made billionaire here] who kicked academia or the corporate grind into touch and instead took the gamble of trying to make it big in a few years, rather than over decades.

Those few wizards who manage to make it big by surviving the trial-by-fire of dungeoncrawling can then sit back on their heaps of phat lewts and act as 'angel investors' to the next generation of arcane scholars. Some of these will end up working for the master as drudges, but others - generally those attracted by the fame and power of the successful magus, but creatively stifled in his shadow - will form the next generation of tomb-looting go-getters.

So there it is. A quick explanation for why a skinny, pasty guy with a spellbook spends his time trying to kill violent strangers and acquire their stuff.

Another thought: if hedge wizards are research scientists, and wizards are start up founders; then what does that make sorcerers? Well, given the risk inherent in using magic in the Vaults game, I'd say that Sorcs are the kind of people who are prepared to cut corners and break the rules for the sake of power. Your archetypal sorcerer will want to force their will on the world without abiding by the strictures or forms others prescribe. In brief, sorcerers are Tony Montana.