Alchemy Revisited, or "They call me *Mr* Paracelsus" 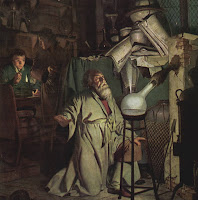 Alchemy as written in 3E - 3.5 especially - is terrible. It suffers from the idiotic 'only magic can be awesome' philosophy that afflicted the entire skills chapter, and arguably most of the edition. Heck, even 4E did alchemy better! (and my personal opinion of 4E as a system varies between "nice idea, shame about the execution" and "kill it with fire!")

The throwaway rules given in the SRD really don't do justice to the historical and literary antecedents of alchemy (and the Epic Level Joke Book only made things worse). The fact is that even though Tindertwigs - aka 'matchsticks' - may impress lost tribes in New Guinea, but they don't really convey the wonder and mystery of a magical medieval fantasy world to people who live surrounded by the technological miracles of 21st century western society. Ditto Thunderstones, tanglefoot bags, smokesticks, and the other barely relevant guff introduced in the Complete splatbooks.

Alchemical flares, flash-bangs and such are simply naff to the point of irrelevance in a game where mid-to-high level characters are going wuxia on one another, whipping up artillery support from bat guano, or bronc-busting creatures of legend to ride around on. Let alchemy do cool and mechanically meaningful things above about 2nd level, and people might just have a reason to respect it and invest skill points in it.

What? You think things like oils of pure darkness, vials of captured time, petrifying powders and dust of antimagic are too 'magical' for the non-casters to play with? Ok, enjoy your caster wank. Ctrl+W will close this tab for you.

All snideyness aside my personal ideal is that a high level character specialising in alchemy should be able to throw together alchemical reagents to create effects similar in scope, scale and wow! factor to the retributive strike from a staff of power. The image of a beleaguered alchemist smashing together two foaming demijohns of glowing liquid and having his own tower (and half the besieging demonic army storming it) blown off the map is classic high fantasy.

So here's what I suggest:

Allow alchemists (that is, people who have invested skill ranks in the Craft (Alchemy) skill) to create level appropriate one-shot minor magic items. These would be limited to thematically-appropriate things like potions, oils, magical grenades, philters of love, and some minor wondrous items. As the creator increases in level they delve deeper into the esoteric nature of matter and master the secrets the alkahest, the elixir of life, the transmutation of metals, and even the composition of the fabled philosopher's stone.

There are limits of course. Alchemy should be confined to (mainly) evocation, necromantic, or transmutation effects. There is little however little precedent for alchemical versions of magic jar, planar binding, teleportation, or the like.

The price to create alchemical items is per the magic item creation rules in the SRD.

Note: I use the Tome Series level limit on item creation IMG. This limits a character to creating only a single magic item of his full CL per character level. Any number of items may be created at CL-4.