Magic in the Vaults game 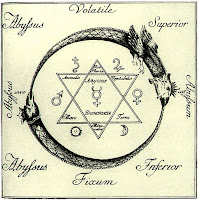 Several of the grogblogs have grumbled in recent months about the prevalence of magic as utilitarian substitute for technology in contemporary settings. I'm inclined to agree with their (generally unanimous) position that magic - even as a tool in the hands of PCs - should be mysterious, evocative and above all, hilariously dangerous. As such, here are a few collected thoughts and ukases about magic in the Vaults game.

Limited Spell Selection
The Vaults game is supposed to be about scrabbling in the ruins and wrestling lost arcane lore from the clutches of inimical foes. So I've decided to trim the initial spell lists for all starting characters down to the spells shown on Labyrinth Lord, page 42 (get yer copy here if you haven't already). All arcane casters use the wizard/elf table, all divine casters use the cleric table (although this may need some tinkering for the sake of the druids...).

There are a few reasons for this:

1. A limited spell selection feels more old school.
2. New players won't be overwhelmed with choice.
3. It means I can dump and/or modify problematic spells from the off.

Everything else in the SRD is currently a lost spell which has to be recovered through adventuring.
The rest of the Spell Compendium? Well, that's entirely DM's option at the moment...

The Pseudo-science of Magic
I've decided that magic in the Vaults game will essentially be a Chaotic phenomenon. Although it does obey its own - oddly intuitive - rules, it is able to short-circuit the cause-and-effect of the everyday world. This makes using magic as dangerous and unpredictable a lifestyle choice as becoming a unicycling juggler of nitroglycerine: sure it's impressive, but everyone knows it can only possibly end really badly.

Like a worker in a nuclear power plant, the more hands-off a character is from the material he works with, the more insulated he will be from the adverse effect. In essence:

How exactly I'm going to implement this in play (some form of casting check, ripping off Grognardia Jim's price of magic table, adapting WFRP's winds of magic rules, repurposing the geomancer mutation tables from "Complete Divine" [amended]) is an open question as yet. More research needed here I expect.

Divine casters (clerics and druids) and demon cultists avoid this whole mess by getting someone else entirely to handle the magic for them. Problem of cranial kablooey-ism deftly avoided, at the cost of being at the continual beck and call of their divine - or infernal - patron.

Magic Trains and Flying Ships
There are no magic trains, no scheduled flying ship routes, no flying carpet taxi services, and no gnomish telegraphs in the Vaults game. Anything like that will be a one-off wonder in its own right, probably with some side effects from the artefacts charts in the 1E DMG...or possibly the Gamma World artifacts mishap charts. Alchemical hand grenades and potions of Jekyll & Hydery are fine; but stuff that looks like it belongs in "The Book of Wondrous Inventions" is a step too far for my tastes.