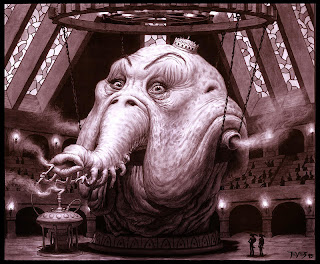 The Gughul is a bloated oracle, neither demon, god or thing of this world, (in)famous for consuming memories in exchange for its gnomic utterances. It can reveal and open pathways to previously unknown (but not sealed) areas of the Vaults; but in doing so has a tendency to send you 'off down the rabbit hole' without warning.

"Describe to you the route to the Chamber of the Sleeping Prince of All Worlds? Of course I can my dear. And I ask only the merest trifle in return; a bagatelle that a person of your broad and varied experience will make up in no time..."

Knowledge consumed by the Gughul will be entirely lost from the mind of the supplicant. They simply and entirely lose the ability to know that thing ever again. Whether there is any way of recovering these memories, and what that cost of so doing will be, is entirely at the DM's option.

The price in knowledge asked of the petitioner by the Gughul will increase with the importance or relative urgency of the question asked. It will almost unerringly know the appropriate quid pro quo, as over the centuries of its existence the the creature has developed ways of gathering dirt on everyone. The Gughul likely already knows all about any character who visits it, even about the life histories of the rootless existential amnesiacs so commonly drawn to the adventurer's trade.

Unique objects (the first/last/only of their kind) will sometimes accepted (or stipulated) as an alternate form of payment. What a being as ageless and alien as the Gughul wants with such things as "the childhood doll of the last princess of (blah, blah, blah)" is an open question. It probably just enjoys watching people jump through the hoops of its various quixotic requirements. Probably...

The Gughul exists in a state of self-described infallibility. It never admits error, never apologises, and never explains.The quickest way to anger it (and have it offer up info for free to one's personal nemesis) is to have the bad manners to call it on the accuracy of its' information. It is positively affected by flattery and flirting, but not to the point of forgetting its own interests.

Stats? Powerful enough to make a mid-level party think "parley?" before "stab it!", but not a bullet-proof DMPC.
Voice? A high-pitched falsetto, likely in an upper class English accent.

I'll probably stick this horror somewhere in the lower reaches of the Vaults. Maybe in the Seraglio of Silver Masques.

(Inspired by Ningauble and Sheelba of Lankhmar fame, the weird monk of the god of forgotten things in China Mieville's Iron Council, and by the useless opacity of Google's 'Help' pages.)

Labels: a wizard did it, building the Vaults, facetious gittery, sages