How Much is a Dovecote Anyway?

I've recently noticed a certain desire to play house among my D&D players.

No, I don't mean they want to emulate the antics of the infamous misanthropic doctor, or that they want to prod at one another in a NSFW way (at least, no more so than normal). But rather that, in a game predicated on playing out a chaos-fucked version of the gangsta aesthetic (to whit: "cap doodz: gain bling, hoes* and respect."), my players seem really keen on nest building.

* Quite why rappers regard gardening tools with such ardour is beyond me.

It starts small, with hirelings, henchmen and various pets. Then, as comfort level with the game world (such as it is) and available party cash increase, my players tend to start looking to put down roots fast and early. As in 'settling down by 4th level' early.

They're like rivers. Sure, they'll merrily babble through the glens, crash over the rapids, or throw themselves off the precipice if that's what's required by circumstances. But the moment the pressure comes off they slow down, drop their luggage everywhere, and start to think the place would look prettier with a water meadow over here, some alluvium there, a reed bed along the margins, an ox bow lake over yonder...

I don't recall people wanting to play Barbie Dollhouse Adventures D&D (I thought of it first Hasbro!) quite this much in my/our younger days. Maybe it's because we have a number of gurlz (chiz, chiz) in the group; or maybe it's because in our 20s-early 30s we're all slowly turning into fat and happy clichés of self-satisfied bourgeois. Whatever the reason, there's suddenly a desire to have a little pied a terre within the game. 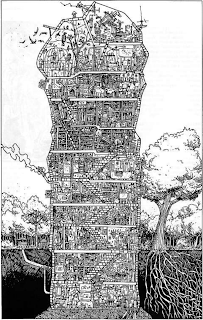 "Gimme!"
I cite pulp heroic precedent for perpetual (skint) peripatetism, link to Al's S&S Greyhawk posts, sink their barge to keep them lean and hungry, and even wave the carousing tables in their faces. But my piteous, nasal, Cartman-like whinings of "But you can't settle down: it's not genre appropriate." have begun to sound pitiful and strained even to my own ears. Obviously people want to lavish care and attention on their particular little personal corner of our 'shared world'.

It's probably entirely my own fault for making the 'soap opera with ultraviolence' of "Deadwood" such a touchstone of the setting. That brings in - as a less than subtle subtext - the whole Western trope of settlement, civilisation and rising gentility. Which is all well and good, until people become more interested in playing Settlers than D&D.

But I think the single worst thing I ever did was let people read the (adapted to D&D) master price list from the K.A.Pendragon RPG.

Player: What's By-zan-ti-ney garb?
Me: *sighs and hands over History of Costume book*
Player: Oooh, pretty.
-----
Player: Can I buy a castle?
Me: When you're 9th level.
Player: What about a (*squint*) manor house? I have the cash, and an entourage to house, and you said the area was looking for people to settle...
Me: Ok, ok.
Player: Now, these tapestries...

It's like watching Clint Eastwood's laconic Man With No Name morph into home improvement fetishist Steve Thomas before your eyes. I'm thinking of burying the Pendragon Book of the Manor under 6' of concrete for the duration. They haven't noticed it yet, but I fear what will become of our sessions if they ever do. I'm not quite ready to have the game transformed entirely into some social media site farming sim.

Greyhawking the place? (in the "pillage the décor for resale" sense) The nearest we've had to that traditional dungeon crawler modus operandi is a particular form of magpie-ism that I call Beckfording. Unlike the traditional "Get the crowbars. It's all coming with us!" form of tomb robbing, Beckfording is where people seriously plot how to unseat that one particular fresco/mosaic/statue and transport it back home. Not for resale value; but simply because it'll look good in their house.

"Yeah, that Green Devil Face we hauled out of the Tomb of Horrors really ties the room together..."

Seeing my players try to get a favourite fresco (a cycling illusion of a pastoral scene) off a wall in one piece is possibly the hardest I've ever seen them work at any form of tactical/logistical planning! Forget searching for secret doors and treasure, they wanted this magic mural. I actually had a bit of a hint of a smidgeon of a twinge of guilt when I invoked the old "magic fades if removed from the room" rule and left them with only a few crumbling fragments of their prize. Had to throw a silly-dense combination of trap rooms and wandering monsters at them just to make the grizzling stop. :/

(grog hivemind query: What exactly is an appropriate basis for an Art Conservation check in B/X D&D anyway?)

So D&D as Grand Tour with added violence. Anyone else experienced it?

Grumbling and random links aside the K.A.Pendragon RPG is probably good (nay, excellent) fodder for a pre-Name level land-holding game of D&D. Even a fighter of 4th level will be a person of note in his local area, having pumped ~6,000gp into the economy (assuming 3/4 of his XP comes from loot) in the time it took him to rise that far. And all but the most insanely dedicated monster-slaying knight errants settle down eventually...

Re: the Pendragon price list. I just treat 'd' as 'gp'. Weapons aside, the price approximations are generally usable.