"Cinnabar? It's no Utopia. There are more options here than you've had before. That's all. There's diversity on an asymptotic curve that never quite touches total breakdown."

Curse you, Tom Fitzgerald! Your mention of extropian science fantasy in the comments to my last post got me thinking about what use one of my favourite New Wave sci-fi novels might be in my game. How could you possibly know that was my Achilles Heel?!

M. John Harrison's Viriconium, China Mieville's Bas-Lag and Jeff Vandermeer's City of Saints and Madmen (one word review: over-rated) seem to get all the love in the esoteric urban fantasy stakes, but Edward Bryant's Cinnabar stories beat them to it by years, and did it with style too. Fine by me, it keeps Cinnabar more of a well-kept secret that I can mine for my own dirty purposes without others calling me on my packrat-ism.

What good then is The City at the Centre of Time for an old school D&D game? Well, in accordance with my recently evolved idea that "the right answer is always the wilder and more audacious of those on offer" (didn't Feynman say something similar?), I think the answer is: plenty.

Cinnabar is a city built around a time vortex and governed by an AI going slowly mad from the strain of synchronising itself across helical time. The burg is described as:


"...a flux of glass towers and metal walls perched atop red cliff crumbling down to a narrow strand of beach..."

and is a post-scarcity dream of genteel urbanism filled with Clarkean sufficiently advanced science (bioengineering, time travel and outright weird sh*t), helical time distortions, and an array of characters bored to the edge of madness by the ennui of their immortal lives.

"And this" said Timnath Obregon "is the device I have invented to edit time."
The quartet of faded and blurred ladies from the Craterside Park Circle of Aesthetes made appreciative noises; the sound of a dry wind riffling the plates of a long-out-of-print art folio.

A few of the more memorable/exploitable elements of the setting:
There's no way I'm not going to rip all this off with the greatest of glee!

Perhaps the oddest thing about the city is that it is described as becoming wilder and ever more expansive the further in toward the centre one travels. Birds are described as travelling in widening gyres to avoid the confusion brought on by time distortions, and characters talk about time compression as one approaches the singularity at the heart of Cinnabar:

"Its the same phenomenon that would make Anita and the others in Craterside Park think we'd have been gone only a short while, regardless of whether we've spent several subjective years at City Centre."

This is the exact opposite of the time dilation which supposedly occurs in a singularity in the real world and, combined with all the other elements involved, makes Cinnabar something of a challenge to map.

Whether you want to use the Cinnabar singularity as written, or make a journey to the centre of the city a one way trip into a timelike infinity (as in the Stephen Baxter short story Pilot, reprinted in the Vacuum Diagrams collection) is up to you. I'm torn between the Narnia/Oz conceit of no time having passed at home, or having ancient and long-forgotten things from the distant past erupt from the inner regions of the city at irregular intervals.

Perhaps the simplest way of doing so would be to treat the wild reaches at the centre of Cinnabar as an inverted wilderness map, with the city as centre point for expansive exploration of its TARDIS-like forgotten areas. Given how big a factor the warped nature of space and time in the city is, this isn't as absurd an idea as it might first sound.

Picture your classic hex map (the one here is from turn-based card PC game Armageddon Empires, chosen purely for prettiness): 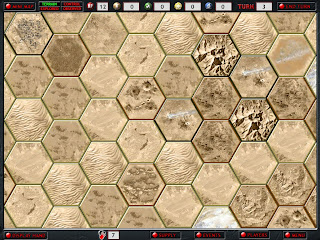 The centre hex, rather than representing the city itself, represents the entire world beyond Cinnabar. The wider world receives short shrift in the original book, being described as comprising no more than "The desert. The greenbelt. The city. The sea", and a disused elevated railway to a long-unvisited city known only as Els (I'm sure the striking resemblance between this far-future SoCal and the self-absorbed worldview of La-la-land is no coincidence...). As the city acts as the gateway between the two wildernesses ("beyond Cinnabar" and "within Cinnabar") it really makes no odds.

The robot-groomed greenbelt surrounding the city would be the ring of hexes surrounding this solitary central hex. The greenbelt might need to be modified slightly for the chaotic and hostile conditions of a D&D world; perhaps into the kind of active defence/free fire area the Neo-Victorian enclave of New Chusan had in Neal Stephenson's Diamond Age. After all, one can't have riff-raff turning up uninvited...

Surrounding the greenbelt hexes on the map, but within them in terms of topography on the ground, would be the commonly visited, inhabited areas of Cinnabar itself in all their ferment and glory:

Take your favourite fantasy city sourcebook (or better still, a sci-fi one) and crank the whimsy, spectacle and self-indulgence knobs up until they break off. Cinnabar should be thrilling, OTT and always full of the next big thing. The inhabitants crave novelty to the point of mania. Don't forget the dark undercurrent of ennui, despair and casual cruelty though. Citizens may be inviolate under city law, but you do know how they discipline Catmothers, right?

Spoiler: Implanted memories of the litters of kittens these hybrids could never have. At any time their masters can have their mind replay the memories as if the death of their litter was happening all over again.

Beyond the ring (outlying in terms of topography, innermost in terms of cartography) comprising the currently active areas of the city would lie the largely unfrequented centre; interior suburbs inhabited by people tired of the bustle of Cinnabar proper or opposed to the omnipresent panopticon of the Network, or left deserted on human life by the changing tides of ideology and fashion:


"The capacity of Cinnabar is so much greater than its actual population. I assume the inhabitants of Cairngorm grew weary of this austerity millennia ago and simply moved on."

Things would gradually becoming more desolate, outlandish and seemingly impossible as one travelled further in. The Klein Expressway connections would become ever patchier, and things out of their rightful place and time would become more commonplace.


"It appears to be a Tyrannosaurus Rex. They're presumed extinct."
[...]
"Obregon peered over the lip of the chasm; he could not see the bottom. He looked to the sides and saw that the abyss had no apparent limit in either direction. Directly ahead, the other side of the chasm was about ten metres distant. "This is impossible" he said "There's go geologic feature like this in Cinnabar."

This is where all the post-apoc ape world, transhumanist dystopia and alternate evolutionary history fanfic stuff you feel ashamed to include in an otherwise fine and upstanding D&D game can hang out. Me? I just consider it another vista to be tainted with my own grimdark gonzo vision. ;)

Ultimately, after as much travel, adventure and confusion in the laws of nature as the DM finds entertaining, travellers would (Terminus* willing) reach the singularity which powers Cinnabar and creates the space-time distortions characteristic of the city. This would be the functional and philosophical area beyond the edge of the map; but not, however, the end of the line:


"What you see is the innermost point of the time vortex over Cinnabar. Yet this is not in itself the destination of the time flow; the anomaly is both hole and tunnel, exiting somewhere and somewhen else."

* A ruling singularity AI called Terminus: did the people who designed the city never hear about the power of names? Did they really expect that to end well? Bloody urban planners and their (apparent) failure to understand the importance of mythic resonance...

So, Cinnabar. That (or a decadent, introverted city state so similar as to be its' near-identical twin) is definitely being included as part of the wider Wilds when (if) I ever get around to mapping them. See it while access is cheap, and while it's still there.


"It's a tall mountain."
"Well that can't be helped" said the double helix "Dream quests are known for their arduousness"

edit: feel the power of the grogblog hivemind! Posted at about the same time as my half-formed brainwurble: