Bestiary of the Vaults: Turboghouls 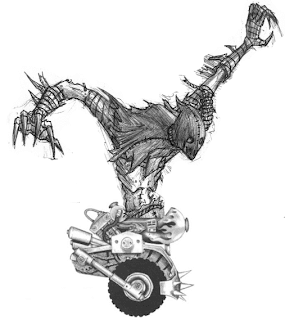 An experiment in thaumonetic augmentation gone horribly wrong, or fallen ophanim, or damned human remnants cursed to perpetual nomadism, or a reified manifestation of settled mans' fear of the predatory nomad, or the result of an unknown memestorm, or just some mad wizard's twisted joke; whatever their origin the people of the Wilds know and fear turboghouls as monstrous speed freaks from a surreal otherworld.

These hyperactive cannibals hoon about the Wilds on self-powered prosthetic wheels sowing chaos and fear. Their idea of a fun evening: tear into an isolated settlement under cover of night, capture the inhabitants, and gnaw off their legs. Those few who survive the agony and trauma of a turboghoul 'hazing' are turned into more turboghouls by methods obscene and obscure.

Being inherently nomadic (and understandably averse to stairs and ladders) these creatures are never encountered underground or in a fixed lair. They are undead and can be turned by clerics as 3HD creatures.

Thanks to the snarling howls of their engines and their constant excitable screaming turboghouls never enjoy surprise. Their assaults rely on crazy bravado, rudimentary hit-and-run tactics, and sheer speed.

Turboghouls attack with a charging overrun attack, with lassos, or with strikes from their wickedly sharp claws.
Unlike their grave-robbing kin turboghouls have no bite attack. This is because they are all punctilious in wearing head protection when traveling at speed. Roll d30 for each pack of turboghouls encountered:


Turboghouls have little respect for any being slower than themselves, and none at all for anyone who lacks respectable haberdashery. Those without hats will be lassoed and eaten first.