Week 2 of our textual interrogation (*puffs Gauloise in pretentious French manner*) of the Dangerous Journeys: Mythus Combat chapter. Having previously disposed of the mechanics for making people's heads explode (not a patch on classic WH40K Ork Weirdboyz mechanics IMO) we move onto the Advanced Mythus take on using kicking, punching and throttling to get what you want. Hopefully there'll be something here worth looting for Classic D&D players. If not I'll have to find a way to pay the due and proper JOESKY tax.

Note: The full filthy exposé of the sordid details of Lethal Combat in Advanced Mythus has been pushed back to next week. Personal reasons, subheading: meatworld obligations.

For those keeping score at home the usual rules apply. And remember: 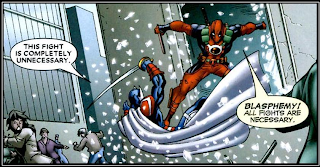 Crushing your enemy in a manner that leaves the poor sucker alive to suffer your gloating, tea bagging, knocking over his favourite vase, etc. So anything from boxing to kung-fu to wrestling.

All forms of non-murderous fighting use the Combat, HTH (Non-Lethal) K/S Area. The essential rules for beatdowns are contained in another of the Combat chapter’s handy sidebars of usefulness +3, without which confusion and raeg would reign unchecked.

Our only defence against gibbering madness.

You could pretty much use the above sidebar as the non-lethal combat section. Everything else on the relevant pages is footnotes and worked examples to the above.

And brace for new jargon:

Non-lethal combat in Advanced Mythus is resolved using the opposed K/S vs. K/S method introduced back in the Core Mechanics section. As previously explained Difficulty Ratings are derived by deducting one skill from another and comparing the remainder to a table, so having the better skill total is *really* advantageous. I'm once again struck by how far Advanced Mythus is from being a straight percentile system.

The rules mandate re-rolling ties until there is a winner, which seems rather arbitrary. I mean; it's not like the image of two fighters locked in combat, every nerve and muscle straining for advantage lacks verisimilitude. I'm sure it all made sense in Uncle Gary's head though.

Once successfully latched on to the foe like a mad dolphin-groping sex octopus (link SFW) you can do one of three actions: Overpower, Stun or Disable. These additional skill rolls are the ‘roll damage’ part of HTH, Non-Lethal. Interestingly there seems to be no quick, simple ‘smack in the face for minor effect’ option. This is because muggles can’t have nice things.


Grab and lock/hold/pin for the purpose of manacling, dragging away to your lair, or whatever other kinky crap floats your naus. Speed Factor 5. DR to succeed depends on relative weight of combatants, per the following table: 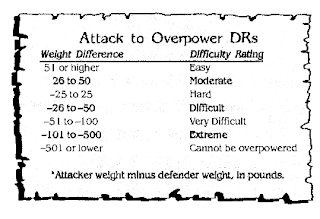 Cake: making you a better fighter since 1992.

Enemy is pinned for 2d6 CT (4d6 on a Crit), and is unable to even speak if his grappler so wishes. You can re-roll a successful Attack to Overpower to extend pinning. No option for taking advantage (stabbing, picking pockets, writing rude words on their forehead, etc) while you have an enemy pinned: someone else has to come along and help you with that.


Smack about for the purpose of "knocking the defender silly".
Speed Factor 3.
Does 1d6 Stun damage per 10 STEEP, or fraction thereof. So STEEP 27 = 3d6 damage. Double damage on Crit.
If Stun damage > Target’s PNCap stat they’re stunned for CTs = excess. Also suffers 10% of Stun damage as Physical damage. Stunned condition is treated as overpowered above, but the attacker doesn’t have to remain sat on them. Extending a Stun is a DR "Easy" BAC roll for the attacker. After the worked example there’s an additional KO/kill coup de grace rule. Take one CT to kill opponent with any weapon capable of doing 18 or more damage.


Exert force and leverage for lasting damage. An additional wrinkle to either an Overpower or Stun attack, although you have to declare the attempt before you even roll to hit. Work through one or the other, as above, and then roll HTH, Non-Lethal again ("Hard" difficulty) to dislocate or break a limb. Speed Factor is 3 or 5, depending on whether you’re putting icing on a Pinning or decorating an Overpower cake. If adding Disabling to an Attack to Stun 20% of rolled Stun damage is inflicted as Physical damage rather than the usual 10%.

Yeah, you can actually suck so bad at inflicting lasting injury that your target can actually recover from a fairly inflicted Stun solely to marvel at your incompetence. Why? Because life is unfair, and because EGG believes in nothing being final until its final. Not too keen on that ‘fall at the last hurdle and all your previous work was just a waste of time’ element; it has a definite ‘snatch away at the last minute’ air which is likely to discourage people from *ever* using Attack to Disable.


This is a vague waste of two paragraphs that explains (poorly) how blunt weapons (coshes, clubs, quarterstaves, etc.) can be used to enhance HTH, Non-Lethal attacks by inflicting more Stun damage. Damage from weapons is added to Stun points derived from skill and 30% of Stun points are applied as Physical damage. The explanation of weapon Speed Factors in HTH, Non-Lethal is a mess, and would have been better replaced with a simple "use weapon’s Speed Factor if slower than the norm for the type of attack" rule.

So after the relative clarity and brevity of the sidebar summary the Physical Combat, Non-Lethal ultimately peters out in one last sorry splurge of jargon-riddled wordiness. Sad really. I think that deserves one last drink to salve the disappointment. (*gluk gluk*)

Would I use these rules IMG?

No. Really, no. From the general 'calculate, compare to table, recalculate, then roll to hit > recalculate and roll against another metric to damage' rule to the specific Attack to Disable 'failed last roll undoes all previous actions' tosh, these rules are just too fiddly and time-wasting to bother with. I wouldn't touch them with yours.

My personal simplifying, lightness-adding fix would change Physical Combat, Non-Lethal from the ground up to a unified simultaneous action mechanic (which may look familiar to /Necromunda/ players; that's because I know to steal from the best). Thus:

There’s no concrete mechanic advantage to having the initiative, but the attacker does get to set the terms of the fight. After all, no one is likely to initiate a grappling contest they think they’ll lose, right?


And that’s brawling in under 100 words.

PR? No such thing. A character can either has a relevant fighting skill, or they don't. If the latter your (crap) fighting ability is derived from stats alone.

Add the sidebar’s Bonus to BAC table, some clarified pin/stun/cripple rules, some proper rules for smacking people about with blunt objects, and you’re gold. If you want additional complexity then add a matrix of possible outcomes (crit, pass, fail or fumble vs. ditto), a note on the hazards of brawling with monsters/guys with actual weapons, and maybe - if you're feeling especially frisky - some rules for using Heka in martial arts. 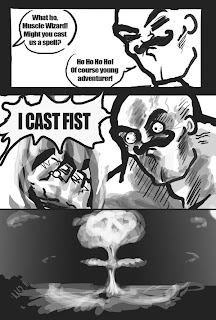 This, or you're just wasting our time.

Above all, Keep It Simple Stupid!

To put it in terms familiar to all D&D players any non-lethal fighting rules more complex than a simple "roll to hit > save vs. paralysis or be pinned" operation will turn off any but the most hardcore grapple fans. There’s no point to rules for attacking to not kill a dude being slower and more complicated than the ones for killing outright: such rules WILL just sit there unused.

Once again the hobbyist with five minutes on his hands sits there asking the professionals what was so hard about that?

Next Time: at last! the long-expected skinny on Lethal Combat in Advanced Mythus.