Précis-ing the Combat chapter of Advanced Mythus into a form comprehensible to the human mind is currently kicking my ass (appropriate really). So, while I try to get my head around the intricacies of killing doodz in the very hautest of haut gygaxian games, here's some supplemental insight on the true meaning of Mythus derived from the long out-of-print Mythic Masters Magazine (hereafter MMM).

This "...NOT a magazine; it's a game supplement" was a bucket of gygaxian musings on-, defences of-, and errata for Advanced Mythus circa 1993. The contents are thick and glutinous in their density of information and opacity of language: this is Gary the wordsmith, unconstrained by an editor, and proudly clad in full no.1 ceremonial dress uniform of the Vancian wordsmith's guild. Even MMM editor Frank Mentzer makes a joke about shuddering when EGG handed him the disk containing these articles.

I'm not going to parse the whole thing. That's an exercise for the (hypothetical) morbidly fascinated reader. Believe me though, it's an eye opener. Here's the contents page. See for yourself if anything tickles your perverted fancy: 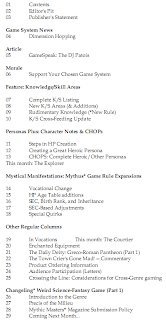 The main reason I've taken a digression from drunkenly lashing Advanced Mythus with whips of scorpions is to draw attention to one particular section of MMM: skill errata. Several pages of skill errata. You might not care for it, but as someone who's just spent six weeks trudging the wilds of the K/S Area system this is relevant to my (morbid, horrified, unable to look away) interest.

* more = better, and hang the quality.

I've grown accustomed to the sheer baroque density of the Mythus skill system, but this still has to be seen to be believed.
Reading this article at one gulp is, well, let's just say bewildering. The Stankhanovite 'all must be codified' madness: It. Just. Doesn't. Stop! In fact, the combined experience of reading Advanced Mythus and then MMM on the subject of skills is more than a little akin to watching Red Army marchpasts from back in the Soviet era. Behold and fear the relentless tread of a bizarre and grandoise philosophy alien immune to rational argument.

I suppose this article does answer some of my bitching about rules insufficiency in the published DJ:M rulebook. But it hardly lightens the load on the poor bewildered player who just wants to play a game of Lets Pretend with his mates.


Advanced Mythus: "What you mean: chargen mini-game? Mini is for the weak!"


There's plenty on offer on top of the "needs moar baroque! MOAR!!!" elaboration of the skill system in MMM. This little volume offers page after page of text confirming that, no, Gary really wasn't kidding when he wrote Mythus; he meant every damn word. 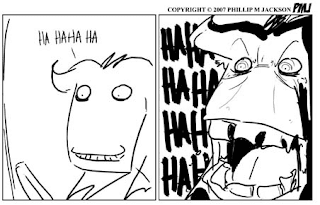 Young and/or poor people? They get, well, spat upon. Actual penalties to number of skills and to skill levels in the skills you have left are supposedly balanced by a couple of NPC contacts, Quirks, and maybe a second language for the especially lowly. Right-oh.

Sweet merciful Anansi! I though GURPS Goblins had unjust social standing rules. Its like a socialist utopia by comparison with Advanced Mythus! To favour rich old farts once in your RPG character generation system may be considered an oversight: to do so twice indicates a settled policy.


As well as vouchsafing unto the devout Mythus-ites additional Switzer madness in the chargens, and walking us once again through the risibly simple process of generating an Advanced Mythus character, and introducing his new alternate history Weird Science-Fantasy (or, as we call it: soft scifi) setting, Gary also has some editorial/authorial points to make.


The Town Cryer's Gone Mad
No, really. That's the title of Gary's editorial/soapboxing column in which The Man Himself takes strident issue with the 'whispering campaign' against Mythus, and excoriates those too stupid to understand his simple little game.

Yes, because Mythus is the epitome of simplicity and lightness, and anyone who thinks otherwise doesn't understand how to use a reference book. Seriously? That's your counter-argument? It would maybe hold water coming from someone who'd mastered the art of efficiently formatting information (see: That Damn Table, my endless bitching about poor layout, disgressive waffle and lack of page references, etc.). As it is, it just reads like a 'stupid people need not apply' tract.

Of course - as later events illustrated - this 'us and them' ranting about uninformed, unprofessional "so-called reviewers" in certain publications turned out to be something other than merely the paranoia of a man at war with an incomprehending world. Still, this is a little embarrassing to read. I kinda wish Frank Mentzer had spiked it.


Gamespeak...the DJ Patois
A two page(!) essay on the True Scientific Realism of the game systems in Advanced Mythus, and on why this makes an entirely new lingua jargonica a logical necessity.


"During a CT the HP will probably need to know his BAC, WP, FAC, or make a Link, or expend ACE heka (as indicated by casting Grade) to start a casting, and then add more heka points for R&D considerations. Those are the highlights."
-- EGG, Mythic Masters Magazine #1, p4

Gary is seriously calling this reasonable. I've looked long and hard, and even run magnets over the page, and I can't detect a hint of irony in his assertions. Just remind me EGG: what was that you said about "The game is too complex" being 'crap' and 'hogwash'?


"Those imposing [Dangerous Journeys] books are daunting to the dilettantes and casual participants who believe that shallow milieux with minimal rules enable easy play and empower those employing such devices. Wrong. What these sorts of games do is limit the scope of play to the particular genre and milieu and force conformity through lack of choice."
-- EGG, Mythic Masters Magazine #1, p3

So there you have it. All that fun you've been having with your fast, light, 'rulings, not rules' games: mere delusion arising from false consciousness. You haven't really been having fun at all. How could 'dilettantes' suffering 'forced confirmity' in such 'shallow milieux' possibly be enjoying themselves? You poor deluded fools! Don't you know that simplicity constrains creativity?

Let's just take a moment to savour it fully, shall we?

That single statement is nothing less than a Genesis Bomb of assbackwardry. It is the totipotent seed for the entire ecosystem of Spaceyan WRONG! we now know as Advanced Mythus. It is a signpost on the primrose path to the perdition of systematised fantastic banality wherein dwell GURPS, RoleMaster and D&D3E.

It's hard to believe - and a little sad to think - that this comes the same man who once asked "Why have us do any more of your imagining for you?" Oh Gary. What happened?


TL;DR: If you have any interest at all in the creative mind behind D&D and/or Mythus - or in the study and treatment of logorrhea - then go read Mythic Masters Magazine.

The potted highlights above don't do justice to the full experience. To fully savour the crazy you simply have to read MMM for yourself! It's a truly rich and heady brew (albeit probably not in the way the author intended). Part rules supplement, part 'how to', part soapbox, and in toto a surreal time capsule from another universe; MMM is a quantum window showing us that even Hackmaster's Gary Jackson(tm)(c)(r) was naught but a pale shadow of the crazy uncle Father of the Game.


Next Time: Combat (contingent on me finally wrestling that SOB of a chapter to the ground)