The Whole Place is Infested with Buggerwumps!

Or, that time when emergent complexity generates more fun than you can eat.

Regular readers will know that I've a tendency to write silly open-ended placeholder names in my wandering monster tables. Case in point, the Masked Sleepers. Another case in point, the mysterious Buggerwump.

Note to the confused. This is a Buggerwump: 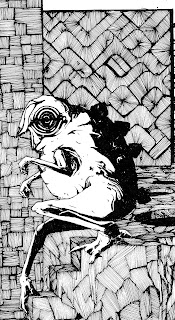 And this is its stat block: 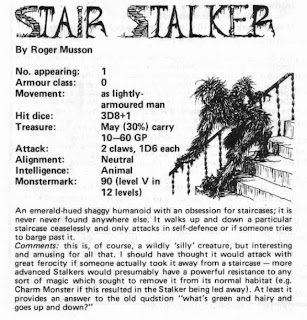 I don't know what the dice were doing the other night, but almost every time an encounter occurred up it came up as "7: Buggerwump". As the Stair Stalker Buggerwump is, by its very nature, a % in Lair: 100% beastie that meant each one needed a new staircase to lurk on. Me being a simpleminded creature, I assumed that the vast majority of these staircases had to lead somewhere.

Cue a smoke break for the players as I desperately thumbnail in a d12 "Where do these stairs go?" table, then chuck some dice at a page to generate new sub-areas using the Advanced Fighting Fantasy method, and then scrabble for the dungeon stocking table.

Of course, some of the new rooms were stocked with monsters, and - my dice being in full-on trollface mode - a disproportionate number of these rooms were inhabited by, yep, more Buggerwumps. Which meant more staircases. And more rooms. And more...

Before I knew it this one boring little cluster of empty rooms on the way to somewhere else was a mad Escher-channels-Piranesi mazework of scuzzy little sub-areas connected by a stupid number of twisting, overlapping, no-sense-or-logic staircases. The whole section - quickly dubbed The Labyrinth of Countless Stairs ("Of course it was here all along. Look, s'got a name and everything.") - echoed to the high-pitched "Blubalululup" cries of the resident Buggerwumps.

As time went on, the players got a bit weirded out by the situation ("Why are there so many staircases? And why are there nothing but these weird bloopy things living here?"), so they pressed relentlessly on in search of a way out. Of course, their charging from room to room went via the staircases, which provoked attack after attack from the (territorial) Buggerwumps as they went. Their reaction when they finally encountered a ramp leading upwards was just comedy gold ("Not a staircase? I call trap!").

Meanwhile I'm merrily rolling dice for the heck of it, making random "blubalululup" noises, and laughing myself breathless. Some days it's good to be DM.

My point? Not much. I just had a "I know! Right?!" moment about random generation and had to share. If nothing else I'll say thanks to Gorgonmilk Greg for making me look at the Stair Stalker again.