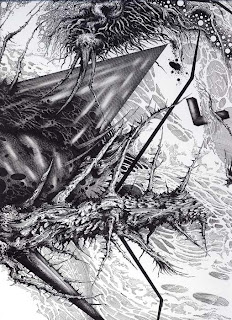 Riffing a little on Netherworks fascinating thought on planes as chakras (I grossly simplify the conception, probably doing it a great injustice) and Michael Moorcock's idea of more accessible 'local clusters' within wider multiverses (5+10 planes in the Corum stories, 6 in "Phoenix in the Sword", etc.), I've decided to hash together a brief overview of the Five Worlds of Nagoh, and the inter-planar connective tissue that binds them together.

Although seemingly at odds with my willful insistence on canon doubt and uncertainty in the Nagoh setting everything here is subject to revision and replacement at any time; it's simply what works for the purposes of the game at the moment.

This is what D&D canon fiends would call a 'non standard cosmology', but what the OSR would call "so-and-so's nutty take on things".

The five worlds - Nagoh and its four sibling realms - move into conjunction and opposition with one another over the ages. These celestial pavanes affect the worlds in a manner that sages and astrologers will happily blather on about until your eyes glaze and you lose the will to live. But what it boils down to is that over the centuries each world causes shift in local zeitgeist as they move in and out of proximity/association/accord to their neighbours. Successive conjunctions and oppositions may help bring about golden age of inquiry, age of horrors, an epoch of retrogressive chaos, a heroic age, and so forth on a neighbour world. These epochal shifts in alignment also cause bizarre tidal effects in the Void Between (how a void can have tides, or anything analogous to them, is another matter entirely...).

Nagoh: "[B]etween the years when the oceans drank Atlantis and the gleaming cities, and the years of the rise of the sons of Aryas, there was an age undreamed of…". Nagoh is pretty much your standard fantasy setting, albeit one with only the haziest claim to any coherent cosmology. 'Home' to the PCs, and in its explored regions not dissimilar to the world of Green Lantern: Mosaic (hat tip: The Burnt Selena Project).

(note: Everything mapped and explored so far is in the central brown bit of the map linked above. I wouldn't want to be the one to beard an Any Median Ian of Wars in its lair. ;) )

Ghoan: A desolate wasteland illuminated only by the faint light of ancient, dying stars. The strange peoples of Ghoan scratch a living from the wrack of their former greatness and fight a losing rearguard action against the twin menaces of planetary heat death and nihilistic heritor races of the darkness.

Hgona: A vibrant tidally-locked Eden. The perpetual Mother of Storms whirls at the noontide zenith of the world, forever calving wild typhoons and monsoon rains to plague the verdant jungles of the Sunlit Lands. The great ring of the cool, long-shadowed Twilit Realms girdles the waist of the world. Nightside is a place of eternal cold and darkness, inhabited by strange and baleful creatures of the outer dark.

Onagh: A comet-lit world of blazing dawns, bright days, and long, lingering twilights. Onagh is home to a number of sophisticated societies, vast and ancient cities in the full flower of their glory, and to innumerable ideological, political and social quarrels.

There is constant fringe philosophical speculation about the existence of a Sixth World, but no verifiable proof of such, positive or negative.

The shallows of the Void Between (q.v.). This is the out-of-phase state you slip into when you dimension door, blink, teleport, have floaty out-of-body experiences, and suchlike. It's also where the intangible bulk of the mountains whose peaks make up all those trendy floating islands lurk. The souls of the dead persist for a while (allowing speak with dead and haunting antics), but gradually fade away to... Well, who knows where. Anyone who does isn't telling.

The metaphysical deep ocean between the Five Worlds, and the surest route between them. Inhabited by weird things that - in the words of the Blessed Pratchett - want to break through and enter the material world, with much the effect of an ocean trying to warm itself round a candle. This is where swords-and-sorcery elder demons lurk, whispering madness and blasphemies. Only lunatics travel through this realm of their own free will.

Travel in the Void Between is fraught with peril. It's tantamount to swimming through shark-infested waters wearing a swimsuit made of bloody meat. Various abjuring incantation can protect against the residents attracted by the delicious psychic scent of material life, but these are not infallible. Entropy is greatly accelerated in the void. Things corrode, rot and weaken rapidly if unprotected; flesh exposed to the Void Between dessicates and dry freezes almost instantly. It's generally considered wise to have some form of life-sustaining protection (either powerful magic, or a big, tough voidship) when travelling.

Navigating the Void Between is as fraught an experience as surviving it, similar to trying to fix one's position without instruments in the midst of a ferocious storm. A journey through the Void Between, even with a suitably experienced navigator and bound native guide, requires a number of transitions (think the plane-shifting in Zelazny's Chronicles of Amber here) between relatively fixed locations (standing vortices and eddies, cold matter clumps, nexus crystals, etc.).

A typical voyage between worlds requires d6 checks on the table below:

* Use monster generator of choice (Carcosa, Random Esoteric Creature Generator, etc.) or create your own horrors. I'm leaning towards a typical encounter in the Void Beyond being about 4d8 HD divided equally between 1d6 creatures, each with 1d4 special abilities replicating spells of level 1d6+3.
** Select nautical hazard of your choice. Multiply it by the risks of sailing through a demon-infested realm with limited visibility, which is slowly eroding your material form.
*** As Sham's OD&D Treasure Tables, or per your preferred retro-clone. Suggested dungeon level 1d8+4. Content should tend away from gold and bling, and towards weird stuff. These caches should be squirreled away in nexus crystals, cold matter agglomerations, sarrgasoed galleons/submarines/saucers/etc.
**** Pocket Universe traps should generally be Star Trek: TNG-style puzzle worlds. You have to engage with the world and solve it to escape; brute-forcing the situation shouldn't be a viable option. The BECMI module Talons of Night might be considered good source material here.

(note: Yes, the above was a shameless rip-off of the OD&D dungeon stocking table. I'm just seeing if there's a way to extend the utility of that little beauty further...)

The astral spell (and similar invocations) remove the caster from the physical realm of the Five Worlds and move him into the rarefied Astral Realm, the domain of dreams, ideas and ideals. Circular time, subjective gravity, thought as motive force, and mind over matter are the norm here. Inhabitants of the Astral Realm are often strangely abstract or allegorical in nature, and long-term visitors may find themselves slowly losing their individuality (keepsakes, memories, quirks of character, etc.) and becoming ever more notional versions of themselves over time. Simpleminded humans tend to go completely mad if they think too hard about how profoundly different the Astral Realm is to the concrete world they know. Those more used to altered states of consciousness, or to thinking in multiple dimensions, tend to cope better.

You can meet the gods in the Astral Realm, but gods in this place are little more than self-perpetuating, vastly powerful archetypal patterns. For most mortals (those below 10th level, and who haven't made some unholy pact for power) this transcendent experience would be akin to trying to establish contact with an incredibly narcissistic natural disaster. Abnormally powerful mortals - who tend to have dedicated themselves to the single-minded pursuit of a particular ideal or philosophy - actually take on something of this 'divine monomania' while in the Astral Realm.

(note: I (barely) resisted the urge to go the whole Dreamtime hog and create a wacky pastiche realm of Astralia, complete with slouch hat-wearing Githyanki larrikins and marsupial kaiju, instead going for a RuneQuest-ish 'realm of ideals'-meets-Godland take on things.)

There are no elemental planes in this cosmology. Almost by definition elementals are creatures of the material world, so that's where they come from (and generally stay). Elementals can be summoned in any of the Five Worlds, but not in the Ethereal Margins, nor in the Void Between, the Pocket Universes, or the Astral Realm. There simply isn't enough material matter in these places for elementals to arise.

This gives me a little more structure than the "yeah, why not?" omnivorousness of the Ferris Wheel of Doom, but still lets me play fast and loose with plane-hopping stuff, alternate worlds, hostile outer darknesses, ghostly hippy space, and the like.