Allegories, Orcs and the Wyrdhawk Factor

(this post has been percolating for a while, but it took Trey's interesting take on the psychology of the Orc to push me into posting it)

I, with Tolkers, cordially hate allegory. For what it's worth I think allegory as a literary device is the last resort of the tub-thumping hack. With the honourable exception of the creations of Jonathan Swift (identifying quote: "Fuuuuuuuuu-!"); Christian of Pilgrim's Progress, Talking Lion Jesus, John Galt, and their two-dimensional, placeholding ilk can all take a hike across a minefield.

The one thing I do like about allegory - at least as presented in that old fantasy standby of the medieval bestiary - is the sheer stonebonking mentalism of the associations made. Why exactly the horns of the Yale swivel independently in their sockets (and what the allegorical connotations thereof are) escapes me, but I like it. I also like the idea of talking, proverbially sharp-eyed lynxes with precious kidney stones; the scatalogical whimsy of the bonnacon, which covered the nearest seven acres in flaming excrement as a defence mechanism; and the audacity of using pelicans - in reality little more than particularly stupid and gluttonous seagulls - as symbolic placeholders for The Passion (and/or self-sacrificing love in general). Those are the kind of associations and twisted leaps of logic audacious enough to cause the absurdity of allegory to undergo phase-change into brilliance.

Similarly in medieval iconography, the various ogres, fairies and so forth all had allegorical connotations. When shorn of their whimsical and/or hagiographic elements the goblins, trolls, etc. all represented the unchristianised Other; weird magical people upon whom it was safe to project all faults, vices and chaotic willfulness that good people weren't supposed to have.

(Usually these stories started out as pagan holdover tales, with a side order of half-remembered historical genocide. No, really. The old British folktale entitled "The Last Pict" is quite overt about it, but any western folkloric story about the 'people under the hill' or 'the fair folk' or 'sea brides' or 'changeling children' probably has roots in tribal petty genocide, and the accompanying theft and acculturation of the surviving young.)

Felipe Fernandez-Arnesto in Millennium: A History of Our Last Thousand Years talked about The Wildman, or Woodwose, being the quintessential enemy of the chivalrous knight, even more so than that other allegorical favourite, the dragon. The dragon represented the devil, but the woodwose (ancient relations of the Woosies illustrated by Tom Fitzgerald and so characterfully described by JOESKY) represented the more immediate and personal threat of human-inflicted chaos. The 'wild man' in all his guises was really no more than the heathen of the forest: untamed, unshaven, unshriven. 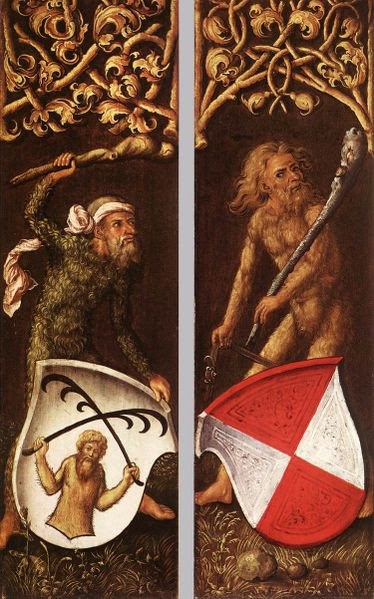 "Woodwose LOEV heraldry!"
What's the nearest equivalent of the unrelievedly black hat "behave or the bogeyman will eat you!" wildman in classic D&D? Yep. The Orc.

Orcs. Is there anything that can be said about the 1HD wonders that hasn't already? Probably not, but I'm going to work over that particular well-worn chew toy one more time, just to see if there's any squeak left in it.

Still ploughing the folklore furrow, E.G.Palmer of Old Guard Gaming Accoutrements blog has talked about something he calls Wyrd Greyhawk; basically a fantasy setting where that all the crazy folklore, Forteana and old wives tales (spontaneous generation, foetal impressionability, "If you do that too much your face will stay that way!") are true. This is an idea that I find compelling in that it allows characterful, if odd, echoes of real world superstitions to add verisimilitude to the game world, while leaving me enough wiggle room to pick and choose exactly/which myths are true.

So, allegory, wildmen, folk genetics and pig snouts. Let's throw this lot on the poor unsuspecting Orc and see what sticks...

My current take on Orcs is largely as an extension of my (previously looted) take on the Orcish Atavism. IMG Orcs aren't rowdy, dim WFRP hooligans, nor are they WowCraft's proud warrior race guys, nor are they the tragic ruins resulting from a Tolkienian evil overlord's twisting of kidnapped Elves into a slave race. Instead they're the direct result of appetite run rampant. Orcs are the degenerated remains of what bandits and mercenaries become if they revel too much in the rape and slaughter of the sack. These creatures, once human, have been intimately and indelibly marked by the Chaos they themselves have inflicted on the world.

I'm not saying anyone who kills, or overindulges in his favourite vice, is going to turn into an Orc. What would be the good of adventuring, or having carousing rules, if that were the case? But that one guy who keeps finding excuses to commit [insert atrocity here], he'll slowly degenerate into an Orc, his physiognomy gradually twisting, physique slowly bloating, and behaviour coarsening to reflect his inner degradation.

Why do Orcs raid, sack and (*ahem*) sire half-orcs on their unwilling captives? Because:
Peaceful, honourable Orcs? Impossible by definition: they're simply not made that way.

All this may make Orcs a little too "evil <==> ugly" for some tastes. But evil, inbred pig-faced hillbillies (and their degenerated pets/livestock/sexual playthings) who positively *thrive* on being vile and "...needed killing, yer honour" work for me.

Disclaimer: None of my conception of Orcs is a new idea. Tolkers suggested the idea of Orcs as corrupted Elves, and Orwell famously wrote in Animal Farm that:


Twelve voices were shouting in anger, and they were all alike. No question, now, what had happened to the faces of the pigs. The creatures outside looked from pig to man, and from man to pig, and from pig to man again; but already it was impossible to say which was which.

My musings on Orcs as avatars of wrath, lust and gluttony run amok are intended as a nod to such things, and to the visceral - if unjust - loathing of pigs expressed in such authors as William H. Hodgson (in his Carnacki story The Hog) and Clive Barker (the Lord of the Flies meets Scum horror of Pig Blood Blues). The further similarity to the rape-frenzied Broo of RuneQuest, or to the Beastmen of WFRP, is - in retrospect - no coincidence.

Gone are Orcs as overfamiliar, pig-faced punchbags from Central Casting. In their place we have the wages of sin and the real monsters that emerge therefrom.