The Neh-Thalggu doesn't get enough love. An alien intelligence that warps in from other realms to steal the brains of powerful wizards like some bizarro truffle hound. 'Alien wizard ninja seeks delicious brains for fun, companionship'. What's not to like?

Look at him. He is avid for your skull meats.
That is one pro-active, go-getting Slug Eat Your Face of brain acquisition.

The Brain Collector has been presented in a number of different ways over the years. It's variously been a kind of brain-fixated Mi-Go (in X2 Castle Amber and the AC9 Creature Catalogue), an enigmatic but non-hostile alien scholar (in Bruce Heard's Voyage of the Princess Ark series), or a massively powerful Mind Flayer-equivalent (3E's Epic Level Jokebook/SRD). We don't talk about its cameo appearance in the ill-conceived, ill-fated AD&D Mystara setting: that whole situation was just desperate wholesale corpse-robbing by late period TSR.

Of course, being 'only' a BECMI monster, the Neh-Thalggu gets no official D&D respect. That's only to be expected though; it doesn't have name recognition or marketability even on a par with second stringers like the Slaadi, the Githyanki, the Aboleth, or the Flumph. There's no Illithiad or Sea Devils creature culture book for the Brain Collector; no Neh-Thalggu of the Underdark sourcebook expounding on the nuances of their sophisticated cerebro-connoisseur culture. AFAIR they didn't even rate a mention in 3E's dedicated tentacles-and-alien-insanity sourcebook Lords of Madness.

Gaming popular culture is similarly left unaccountably cold by the NT. It even seems to have fallen between the cracks for those parts of the blogosphere that otherwise love their theramin-soundtracked science fantasy and/or Klarkash Ton-infused weird. No blog posts. No WTF D&D? citations. Not even a single passing mention in noisms' epic 2,000+ page Let's Read the Monstrous Manual compilation. Poll a hundred gamers and I'd put money that not one would have named the Neh-Thalggu as a top ten fave beastie.

Why is this? Is the whole 'We come to take your brain Mr Wizard' thing too adversarial for power-fantasizing bathrobe fetishists? Is the Brain Collector somehow UWP* 'bad form' in the same way disjunction is, but the Rust Monster unaccountably isn't? Or is it just that the Neh-Thalggu intrudes on the Mind Flayer and Aboleth conceptual niches?

I think part of the problem is presentational. The write-up in the CC is a bit *meh* and the art is distinctly unflattering. Bizarre-looking: yes; arresting, inspirational and thought-provoking: no. 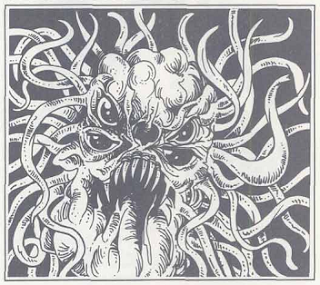 As written the BECMI Brain Collector is a No.# App: 1 ronery-ronery closet troll which pretty much acts as a wizard of d6 levels with fighter HD and a bite attack. The threat it presents depends largely on the luck the GM has with its 0-12 randomly determined spells. It's a definite test of GMing ingenuity to compose a meaningful 'eat the wizard's brain' threat with - for example - knock, infravision, floating disc, ventriloquism and locate object.

This being the case you could argue that the Neh-Thalggu is a classic old school monster; one where imagination and improvisational skill in using it trump listed abilities. But it still seems a little - well - naff for an intelligent 10HD otherworldly brain epicure.

Moving on to the Epic Level Jokebook (hereafter referred to as the ELH), this book claims that the BECMI write-up 10HD Neh-Thalggu are mere juveniles out on a first brain-looting spree, and that the full-grown Brain Collector is a 32+HD godbeast. Thanks to the ability sprawl endemic to post-Classic D&D the 3E ELH Neh-Thalggu reads like its several monsters rolled into one:

Yeah, there is a LOT of power duplication there. That could easily be a power list for two or three different hit-and-run terrors, brain-seeking or otherwise.

However, if divested of power duplication and general Epic Level Jokebook cruft (+20 Insight bonus to AC? Hahahahahaha, no. As Mitchell and Webb would put it: "That's numberwank!"), the SRD Neh-Thalggu still offers interesting optional abilities for the creature in a Classic D&D game. Put the above powers into a d8 table and roll a couple to instantly individualise a Neh-Thalguu. That'll keep even players who've heard of the beasty on their toes, and will be a marked improvement on its current solitary one-trick-pony 'spells, then bite' tactics.

If you don't fancy rolling for additional abilities simply give the BECMI Neh-Thalggu some way of paralysing/stunlocking opposition, such as the similarly brain-eating Illithid already enjoys. Just give it carrion crawler tentacles* (or the use of a wand of paralysis**, or a cult of net-armed minions, or whatever) and an agenda: instant scheming alien kidnapper.

* Additional idea: Carrion crawlers = Neh-Thalggu larvae.
** This will likely be by GM fiat. By the book BECMI Neh-Thalggu are dirt poor, with only TT ‘C’ (average value 750gp and only a 10% chance of magic) to their unpronounceable tentacle-waggling names. By stark contrast the ELH Neh-Thalggu are the single richest monster in the book: triple normal treasure.

And the SRD Brain Collector has more to offer aside from its (absurdly broad) power list. Take a look at the text of the Neh-Thalguu SRD write-up:


A creature whose brain has been harvested by a brain collector cannot be raised, reincarnated, or resurrected while the brain is in the creature, because the collector preserves and draws upon the soul and basic personality of the creature for as long as it retains the brain. Neh-thalggus’ own language is a silent sign language 'spoken' with their writhing head-tentacles. They can also communicate telepathically with any creature that has a language within 100 feet.
-- d20 SRD

So as well as more powers than you'll ever need to make an interesting stalker/killer monster, the SRD Neh-Thalggu also has AS STANDARD:
A genius alien with tongues + magic jar on demand. That's a campaign archvillain power list in and of itself! All that's required is a GM call on precisely how much of a captured personality (memories? emotions? values? attachments?) the Neh-Thalggu can access. Slap that on the BECMI Brain Collector, and enjoy.

So here's to the Neh-Thalggu: always outnumbered, never outgunned.

Edit: found a Neh-Thalggu mini. It's a fantastic-looking kitbash of GW Tyrannid parts created by a guy screen-named Kep as part of his sculpt all the ELH monsters from scratch project. Behold the googly-eyed toothy magnificence HERE.