Dangerous Journeys/Mythus: the 400+ page magnum opus fantasy heartbreaker created by the King-in-Exile of RPGs after his ousting from the kingdom forged by his own hand. This here is the first of a semi-regular series of posts chronicling my delving of this ... creation ... for ideas that might be usable in Classic Fantasy Role-Play Simulacra Games.

Why am I doing this? 50% coz I need a break from battering my head against the ever-mutating hydra of GCX; 50% coz Mythus has a kind of "is he serious?" car-crash fascination. It's almost like watching a much-loved celebrity have a massive public breakdown. 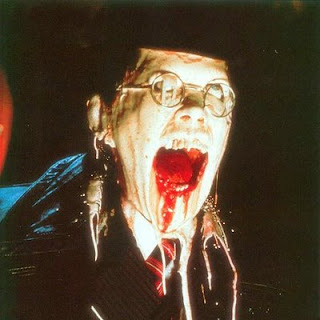 Part the First
In which our hero dips his toe into the pool.

After the credits and frontispiece proceedings open - - with the contents pages. Yes, pages. Two of 'em, in dense two column layout. Numbered chapters broken into sections, then into subsections. This is the antithesis of Chill's posh restaurant menu minimalism and seems comprehensive, if a little overwhelming at first glance. Big bold headings inform us that the first 55 pages (Chapters 1-9) are the Mythus Prime system rules. After that you've about 300 pages of Advanced Mythus rules split across chapters 10-17. Rounding things out are Appendices A-to-M, then several pages of indices.

Next up, the Editor's Preface by Lester Smith. This sets the tone for the whole book by being a dense, unrelieved textwall which causes my eyes to glaze over 2-3 times per column. ("Oh, this bodes well", he said.) The introduction openly compares/contrasts Mythus with AD&D. Supposedly Mythus "...is like a jam session in which one mythic vision provides the unity, but the individual musicians are free to improvise upon that theme -- and any sort of musical instrument is allowed." There's quite a bit of this, but boil away the verbiage and it comes down to: D&D is class-based, Mythus is 'descriptive' (aka: a skill-based RuneQuest clone).

A brief, ranty aside: was textwall really the state of the art in game books in the early 90s? I remember Palladium books of the period being similar in their layout (two column, b+w, fugly fonts), but not so bloody dense. A bit of checking indicates that two column b+w was pretty much an industry standard, but there doesn't seem to have been a universal ideological aversion to paragraph breaks. The spacing and typeface of the Mythus rulebook says trenchant things about GDW's typesetting and editing departments circa 1992. ("Show us on the doll where whitespace touched you...")

Enough of that. What new horrors wonders and delights await?

Page 6: Welcome to the Mythus Game in a big fat heading. I feel duly welcomed. And then night fell and the textwalls attacked me. Three paragraphs of author introduction before we even get to the industry standard What is an RPG? section. This is followed by a section on The Gamemaster which dangerously asserts that "...a GM must have material prepared for game action spanning days, weeks, months and possibly years of roleplaying activity by the player group."

I will speak from bitter experience and say that this sort of thinking is BAD ADVICE that lead me astray in my younger days. It's the gaming equivalent of someone telling you to spend several years at a conservatory of music before starting one's knockabout garage band. Over-preparation kills campaigns in the cradle and discourages starting GMs: anyone who recommends it is not your friend!

It's not impossible that this "first spent a decade creating your world from scratch" advice was actually written by Dave Newton, but I doubt it. The echoes of the thunderously magisterial "...YOU CANNOT HAVE A MEANINGFUL CAMPAIGN IF STRICT TIME RECORDS ARE NOT KEPT." (AD&D DMG) are classic Gygax.

This shocking piece of sabotage - however well-intentioned, poor advice is still poor - is thankfully balanced by this: "...the time required is dependent on how well the player team operates, how well it uses its creativity and imagination in problem solving." Creativity? Imagination? Is that player skill I see being emphasised? OK, I can live with that.

Page 7: The Roleplayers - introduces the idea that you play Heroic Persona, which is Dangerous Journey-ese for Player Character. Game Premise: A potted introduction to Aerth, an alternate world where all myths are true. Supposedly the myths and legends of our world are bleed-through of actual historical events on Aerth. That's potentially cool.

Page 8: Continuation of Game Premise section.
Heka (magic energy), the underworld of Subterranean Aerth, the interior Hollow World, Faerie and the NetherRealms are introduced. And somehow all that potential coolness just oozes away through the cracks. The forthcoming Mythus Magick and Epic of Aerth products are plugged. Division of Basic from Advanced Mythus is emphasised ("...almost two separate games, in fact!"): Basic is for beginners, Advanced for 'veterans'.

Another aside: Epic of Aerth is all kinds of not good. It's an alternate Earth fantasy setting with no sense of the fantastic. Yes, there are elemental gems, but they're nothing remarkable beyond going up to 11 on the Moh's scale of hardness. Yes, there is a Hollow World, but all the dinosaurs are logically coralled by geological era. Yes, Atlantis, Lemuria/Mu and Lyonesse are all in there, but they're either made as dull as ditchwater or given a lazy-ass 'lick-and-a-promise' treatment. And there are - no word of a lie -16 pages of tables determining how the quality of education in your home country modifies your ability to learn magic.

But back to the matter in hand.

Page 9: Common Vocabulary
A page-long Introduction to Mythus jargon, and to the physical impedimenta you will need to play the game.
Personas: Heroic Personas (HPs) are PCs. Other Personas (OP) = NPC. Evil Persona (EP) = villain character. "There are many other types of OPs as well -- see Chapter 15 of the Advanced Mythus rules for details." I'm not sure if this change to the established nomenclature of the hobby is an end run around T$R's legal department, or if the Cosmic EGG considered it a necessary and useful innovation.
Sheets: a definition of a sheet as a sheet of paper. I am not making this up. There is a paragraph about sheets of paper and how they can be used to record character information. Also an invitation to look over the character sheets in the back of the book when you "...want to take a moment from reading text". Sady this flickering glimmer of self-awareness is soon quashed and we're off to explore the wonderful world of:
Dice: the system uses d10s and d6s, which is nice and simple. But then we get the better part of a page explaining how to roll a d%, d3 or d5. Very... thorough, is the nicest thing I can say about this.
Useful Items: "Besides dice, pencils are necessary for play, of course." *facepalm* Recall that this book was published in 1992, nearly two decades after D&D became a household name. There's handholding, and then there's insulting the intelligence of the reader.

And that's the endless preambling over with. Several thousands of words of text relieved by two generic heroic fantasy illos: a dragonship at sea (by Ellisa Mitchell) and a half-naked barbarian fighting a writhing dragon (subtly credited to Ellisa Mitchell, and thanks to faoladh the Magnificently Chappeau-ed for the catch). These are technically well-executed b+w line work and seem to (intentionally?) echo the style of the 70s Savage Sword of Conan comics.

Nine pages in and we've not even scratched the surface. What was the editor doing when he was supposed to be trimming verbiage?

Next up: Character Generation and Conducting Actions

And it looks like I'm definitely going to need more booze...