The Passage of Time 2 - Calenders 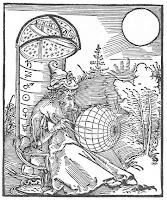 Fantasy calendars; was there ever a subject more prone to over-elaborate systematisation of the fantastic (or as I prefer to call it fanwank)? You can make a sophisticated calendar of Mayan or Javanese complexity if that's what you want; but, if your players are anything like mine, they'll just glaze over when the infodump hits them. So the question must be asked: why bother?

Some of the friendly crazies out there pull off an interesting twist by making the ordinary seasons we know into ones of positively Helliconian duration and impact, and thus make the passage of time a significant aspect of their game.

I personally prefer to go follow a simpler route, ripping off the primary world calendar (as discussed here by RipperX). Given that I find our own terrestrial calendar quite complex enough, and moreso than necessary for gaming purposes, I've decided the Vaults game calendar is going to work as follows:

All the fractional day/leap year stuff that our unoptimised cosmology primary world lumbers us with gets thrown out of the window in favour of a single repeating calendar. The first day of the year is always a Monday.

Now, as with our world, the seasons, months, lunar phases and such don't quite synch up. I've managed to fudge this a little with my use of a repeating calendar by making the 5th intercalary day into Year's End, a day that mysteriously contrives to fall on both the winter equinox and the last New Moon of the year. Think of it a combination of New Year's Eve and Halloween.

As for naming the seasons, moons, months, days of the week and such, for the moment I'm going to stick with the mundane world versions. This is for simplicity as much as anything. Everyone knows that Friday falls three days after Tuesday, but not many people can recall whether Needfast or Growmeet comes first.

This will probably all be subject to change as we add more background during play.