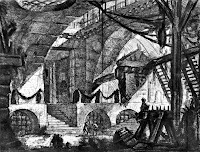 OK. So that's the mechanics tacked and wired, physical paraphernalia (minis, battlemats, charsheets, dice, etc.) assembled, players corralled; now what we need is a dungeon to explore and loot. That'd be the eponymous Vaults of Nagoh then.

So what are the Vaults? So far I picture them as a variation on the time-honoured theme of the big-ass mad wizard's hostile underworld megadungeon (tm). You know the type: masonry walls and oaken doors; piles of loot beyond the dreams of avarice; swarms of surly natives looking to kill and eat the puny surface-dwelling interlopers; successive levels of ever greater strangeness and danger; mainly built in the Cyclopean Monolithic and Overblown Gothic styles; and all decorated by someone with a magpie's eye, an unlimited budget, and thousands of freshly-whipped slaves.

The sole aesthetic unifying touch to the Vaults so far: the ceiling will almost invariably be held up with vaulted ceilings. Why?

1. Because vaulting is an efficient load-distribution system
2. It looks cooler than boring old domes or post-and-beam construction (rib- and fan vaulting especially so)

Here's a list of possible names and themes for levels, sub-levels, dungeon features and such for the Vaults. Opinions sought and welcomed.

For minor colour and detailing, I'll be borrowing the idea of omnipresent pest holes from Sham, a native trap restocking crew from Amityville Mike, vertical connections between levels from Jeff, and the idea of explorable ventilation shafts from Pat.

What the hey! If I can't do original (*rassa frassa* Harn), I might as well do the best derivative possible.