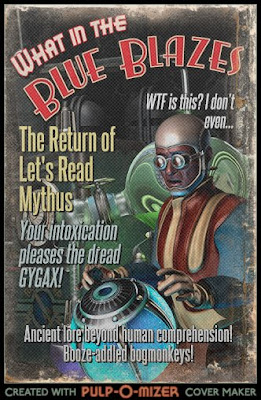 After a hiatus entirely too long, fraught, and full of fractal fail for my own comfort the ill-considered dissection of Dangerous Journeys: Mythus returns, a mere eight months later than expected (in RPG Kickstarter circles this is known as 'business as usual').

This week I have elected to inflict upon the world the long overdue Art of Chapter 12 post; a light amuse bouche of a thing wherein your humble host dons polo-neck and beret, and attempts to channel art critic mojo into his tiny monkey brain.

Those playing along at home may wish to note the following modifications to the customary rules:
There's a lot of art in the expanses of Mythus chapter 12: incidental art in black-and-white and full-page colour plates.

p216 - Ellisa Mitchell - tree, sword + runestones.
Tree has semi-anthropomorphic bole, tree-impaling sword is obviously perilous (in the Arthurian sense), runes may or may not be a bilingual bonus that translates as "Please do not stab the trees". Lightning in the background echoes the anguished twisting of the branches - nice touch; portentious. Fine use of negative space and directional cues. Content is semi-related to text (Heka-based attacks). 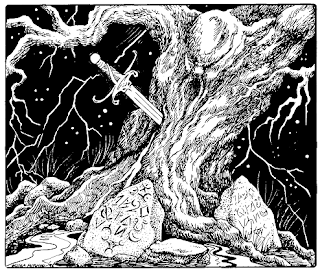 p229 - Ellisa Mitchell - stylised griffon.
Excellent composition draws your eye to the mad, starey bird eye of the griffon. Consistent penwork(?) across the furred and feathered parts of the beast give it a coherence of form lacked by many monster pics while retaining the heraldic essence of the beast.  A fine balance, nicely struck.  Whoever sculpted the recent GW Empire Griffon model (aka: the Warturkey) should look at this picture and cry in shame.
Picture has no relation to content. Seemingly a space filler. Shame, it deserves better. *gluk*

p232 - Tony Szczudlo - Bad-ass fantasy African warrior standing in a cave mouth.
Once you get past the 'Mbongo McSkullhat of the K'lishe tribe' first impression this picture is kinda cool in a Savage Sword of Conan or Imaro way. The picture is well-executed: good composition, fine detailing, clever use of negative space and shading. The few fantastic elements (the skull helm, the odd pick-mace weapon) convey the idea of a fantasy Earth subtly and well.
Shame it's stuck in the midst of the awful, forgettable, multi-page example of play section. *gluk*

p234 - Ellisa Mitchell - eyes+snakes glowhenge.
A pretty generic henge-as-portal image. Lidless eye and winged serpent motifs add a little weird to an otherwise unremarkable image. Well composed and executed, although some of the linework on the trilithons makes them look a bit wooden.
Seems a bit out of place in the combat chapter. *gluk*

p240 - Ellisa Mitchell - weapons crossed over a shield.
Well drawn in a 70s comic art way; clever use of linework and blocking to convey a sense of shine and reflection, but sadly a bit "yawn" in the subject matter. At least the picture makes sense in context (the endless pages of weapon descriptions), although it would have worked just as well smaller and without a frame, breaking up one of the interminable columns of text.

p245 - ??? (no visible credit) - conquistador being loomed over by two giant skeevy balds.
A nice little piece of doomed pathos in 90s fantasy art, this is the antithesis of the flavourless genericrap that infested the contemporary AD&D2E rulebooks. Good composition and line use; a sense of captured movement; my simple brain and untutored tastes actually like. This belongs somewhere better than in the midst of weapon descriptions. *gluk* 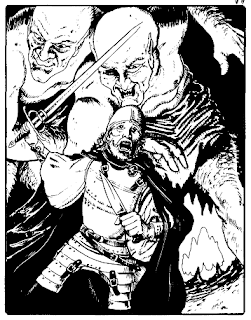 Insert your own "You're boned!" caption

p251 - Dave Miller - conquistador on a ship, Grecian temples in background
Presumably supposed to represent Mythus' default anachronistic hotch-potch setting of Aerth, this is ok. Good composition and use of space, workmanlike rendering of content. The problem it that it's the sort of picture the eye would skip over without pausing were it in a comic. No wow! factor; just another day in the life... *gluk, gluk*
I suppose the conquistador's armour is semi-relevant to the surrounding text (armour types).

p274 - ??? (no legible credit) - Sven Beardsson, knotwork chiseller, poses before his latest work
A burly viking type wearing Greco-Roman armour, presumably an intentional anachronism. The linework is fine, but the composition is a little odd, with the central figure off-centre. The background (Norse knotwork and Bayeux Tapestry-style human figures) is so-so.
No idea what the picture has to do with healing (the related text). *gluk*

p275 - Ellisa Mitchell - Angrycorn is angry! GRRRR!
Although the content - an angry charging unicorn in close-up - is unexpected, the technical execution of this picture is very good. Fine flow of lines, excellent less-is-more crosshatching. Another picture where Mitchell uses directing lines and shading to draw your attention to the beast's eye.
Not sure what a unicorn has to do with healing rules though. *gluk*

After the "Mythus art not terrible! shock of the preceding pictures the full-page, full-colour, gloss paper-printed "Behold our magnificence!" images that follow are generally disappointing given what they might have been. As a general rule what art there is is spread over a larger area than it probably merits...

p257 - Midgette and Meyer - Armwrestling in the tavern
Another scene from the rich and exotic world of Aerth, in this case renaissance arm-wrestling. The composition is cluttered, the background a featureless wash, the facial proportions and eyelines of the score of onlooking characters are fuxxored, the central drama is uninteresting.
I'm really not keen on this picture, and can't imagine why it would merit inclusion, let alone an entire page. *gluk gluk*

p260-261 - Midgette and Meyer - knights brawling in the road
Let me start by saying that 3/4 of this two page spread is worthless space-filler. No, seriously. Look: 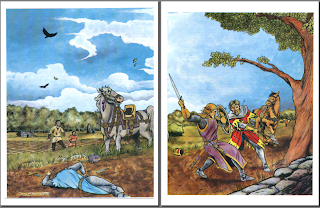 Are you f-ing kidding me?!

That's the image as it appears in my Dangerous Journeys: Mythus soft cover. 11" x 17" of next-to-nothing. It may seem unremarkable to you, but I find this picture profoundly offensive. It's no more than a piss-poor knock-off of a Prince Valiant comic panel, but it has adopted in my mind an almost totemic status. This picture can stand as a microcosm of the entire Mythus experience: needless bloody boring bloat overwhelming what should be interesting and exciting. 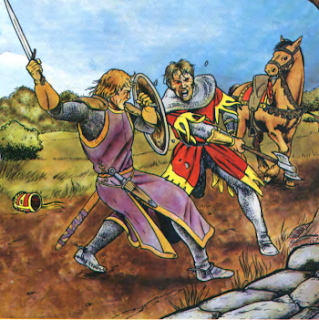 Even after trimming to its essentials the piece is unremarkable; even a bit dull. Can you imagine if, for example, a Games Workshop artist circa 198X had the temerity to turn this in as a completed piece? John Blanche (GW Art Director and sensei of blanchitsu) would have had his head!

This should be a black-and-white incidental piece breaking up text somewhere; it lacks sufficient clout for its canvas.

I think that was a 'drain your glass' moment there. 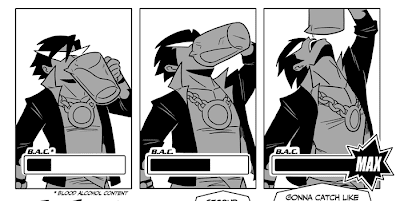 p264-265 - Allen Nunis - lizardmen hunt a giant wombat in a mesascape with pteradons.
Now this is more like it! Attention-getting subject matter, good composition and an interesting use of colour palette; almost cartoonish, but in a good way. Although blown up rather larger than it probably merits (another glossy paper double-page spread where a single page would suffice), this picture is pulp as owt! I especially like the slightly bewildered look on mega-wombat's face. Bollocks to Aerth! I want to know more about the world in this picture please.

p268-269 - Allen Nunis - the Zulus (+ their cheerleader) haet little red goblins!
Another characterful piece, the sort of thing that would have worked as a comics book 'pin up' picture back in the day. The content is a little odd, but may be the film "Zulu" as told from the AmaZulu perspective. Although a little comic book in framing and execution for some tastes, the sheer liveliness of the composition, and interesting use of negative space and stylisation to represent a fantastic, dreamlike quality, make for an interesting whole.
Not sure why its in the diseases section though... *gluk*

My favourite piece of colour art so far: "Rhino HAET street dance!" Yes, I know it's supposed to be a rhino hunt gone wrong somewhere generically East Indian, but I prefer to view it as a dramatic illustration of a lost Just So Story in which rhino and elephant, rajah and archers unite to cleanse the land of verminous infestations of street dance troupes. Yes, the dancers may have disguised themselves in the traditional Indian man-nappy (pron. dhoti) but Rhino knows those synchronised flailers for what they truly are.

Joking aside, the picture share a similar comic book stylised realism of form and colour style with the other colour art in this section. Although there's nothing inherently 'fantastic' about the subject matter, the composition is interesting, the subject matter non-boring, and the only weak point is a background which seems more tree-lined boulevard than wild Indian jungle.

Sadly for the self-styled "...quantum leap in roleplaying games..." there is no quantum leap beyond the 90s gaming industry standard in the use or quality of art. Difficult to believe that Mythus was published only a year before Mayfair Games showed the industry what could be done with the full-colour-and-graphics-on-every-page Underground RPG. A pall composed of deadline fever and vague client definitions seem to loom large over many of the pictures in DJ:Mythus, a confluence of circumstances which prevents "...this game far beyond any others" from even matching the achievements of earlier games like Dragon Warriors in creating a coherent game world with its art.

Not that a unified art style is the be-all-and-end-all of a game. The two biggest names in the transatlantic fantasy gaming industry (TSR, GW) used whole stables of artists - each with their own tastes and styles - to excellent effect. I'd love to know what went wrong here...

Next Time: We peruse, critique and mudlark Chapter 13: Heka and Magick. A chapter in which teeth are ground, heads are scratched, and salient similarities are noted.

Supplemental Mythus Madness: For those truly sick of mind, here is the full text of TSR's "Waaaaah! My toys!" lawsuit designed to strangle DJ:M in the cradle. The sheer effrontery of beating someone with a stick he invented has to be seen to be believed.