There is a 20% chance any castle/settlement encounter on the Nagai Plains* is with a Villar, one of the famous living towers of the Wilds.

* Between the Deus Tines, the Crumbling Hexlands, the Footprints of Ayrvaat and all the ruins, lost cities, brigadoons, soft places, nomad tribes and ideocults out on the Plains I'm surprised there's any room left for the grass.

What does a Villar look like? Well, pretty much this: 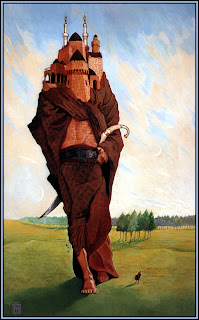 That little blob to the bottom right. Your guy.

Most Villars amble along with a slow, smooth elegance (the inhabitants feel less rocking than in a ship) which covers the ground as rapidly as a running horse. Others stand still for years on end, arms crossed and 'chin' rested contemplatively on one immense hand. Yes, Villars are able to climb, albeit slowly and with great care.

These self-willed colossi of unknown origin are perfectly happy to have people move in to their summit towers, it seems to fulfil them in some undisclosed manner. They will happily negotiate to travel to particular locations in return for maintenance work, repairs, beautification, or the eviction of annoying pests (birds, harpies, etc). Villars are rarely if ever hostile (treat all 'hostile' reaction rolls as 'avoid/ignore'), but will occasionally stomp or kick in self-defence. Hoofed by an unhappy castle? Save or die I'd say.

A Villar is largely immune to mind control magic (charm castle? Fek right arf!) and is protected from most physical harm by its massive size and stone-hard skin. It takes immense power to do anything more than mildly inconvenience a Villar. An earthquake spell or horn of blasting might do one some harm, whereas something like move earth or stone to mud might cause them to trip or stumble. Why not try seeing what happens if you summon an earth elemental inside a Villar's leg? That should put a smile on the GM's face...

The walking towers will not approach within 'sight' range (~11 miles) of normal, sedentary castles or cities, which they refer to by an archaic name whose closest modern equivalent is 'sleeping kindred'. They will cheerfully wander through small or impermanent settlements (villages, tent cities, camps, etc.) with all the blithe disregard of a man for an ant's nest. Dungeons? Villars really don't like to talk about dungeons, and will change the subject politely but firmly.

Inhabitants? 50% chance occupied, in which case use the OD&D castle table. If you like a bit of gonzo on ya dinner then you might instead want to roll on BBGLF's Space Fantasy Castle Inhabitant Table. If the Villar is vacant then you can always roll up a plot hook on BTBG Al's Random Ruined Buildings Contents table (coz a 100'+ tall walking castle isn't plot hook enough in itself...).