Bestiary of the Vaults: Ashagrals 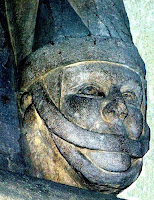 Ashagrals appear at first glance to be malignant dwarves with twisted limbs, grossly oversized heads and wildly unkempt hair. They are invariably chained up in a macabre collection of black iron shackles and branks of which any torturemaster would be proud. On closer inspection it can be seen that if freed from their bonds Ashagrals would likely stand taller and broader than men. Their voices are loud, their tempers short, and their sense of their own dignity touchy beyond that of the haughiest aristocrat. They speak Dwarven, Common, and the trade language of Vaults (largely derived from Goblin) in harsh, unmusical accents

Ashagrals are usually found in the entourages of the mysterious Rook Seers of the Vaults, for whom they act as heralds and honour guards. Lengths of chain extend back from the head harnesses of the twisted to the palanquin of their master. Although they are just as insolent and curt to their Rook Seer master as to anyone else they generally serve with commendable dedication and courage.

Ashagrals prefer to wield jagged-edged glaives (treat as pole-arm in all respects) with a deftness that belies their warped bodies. The eldritch runes carved in their shackles mean that each enjoys the benefits of an ongoing protection from normal missiles effect.